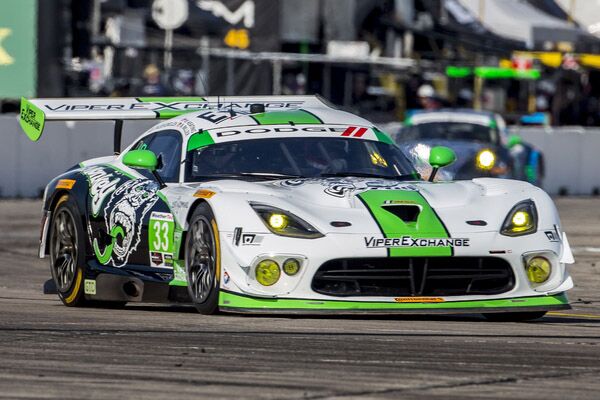 SEBRING, Florida (March 17, 2016) – ViperExchange.com has returned to Sebring International Raceway this week determined to erase the memory of last year’s narrow loss in the closing minutes of the 12 Hours of Sebring in the 64th annual running of the classic sports car race this Saturday, March 19.

All 12 hours of the race and more can be seen in combined live coverage on FOX Sports 1 (FS1), FOX Sports 2 (FS2) and IMSA.TV, from the pre-race grid and drop of the green flag all the way to the checkered flag and post-race celebrations. Live coverage opens on FS1 from 10:30 a.m. until 12 p.m. EDT and continues for the balance of the race on FS2 from 12 to 7 p.m. EDT. IMSA.TV carries the coverage from 7 to 10 p.m. EDT with FS2 returning for the race finish and final hour of coverage from 10 to 11 p.m. EDT.

Gas Monkey Garage owner and founder, Richard Rawlings, is scheduled to attend Saturday’s race and do his part to help the ViperExchange.com team get a win that slipped away in the closing minutes last year.

“I am excited for Richard to experience Sebring,” Keating said. “I call this the Spring Break of Motorsports. This is his crowd and these are his people. As far as I know, this will be Richard's first sports car racing experience and I expect him to enjoy it.”

Frequently leading in 2015 along with Keating throughout the 12 hours, Bleekemolen was battling for the win in the final minutes of last year’s race. He took the No. 33 to the front less than five minutes from the finish only to see the Viper lose its engine with victory in sight. A pinhole leak in the radiator, likely caused by track debris, saw the Viper begin to overheat in the race’s final hour and ultimately quit with victory so close.

“Last year still hurts a bit,” Bleekemolen said. “Being so close to the win and then lose it with a few minutes remaining was hard. So, I definitely hope to make up for it this year. The team is well prepared as always and we had a positive test a few weeks ago.”

Keating has twice come close to Sebring success only to be denied in the final moments of the race.

“The 12 Hours of Sebring is a hard place to win,” Keating said. “It is so elusive that I think it would be ridiculous for anyone to say they ‘expect’ to win but, yes, it would be awesome. I've never even podiumed here but have come within the last two laps twice! I would love to win, and there is definitely a little more excitement with Gas Monkey Garage on board.” 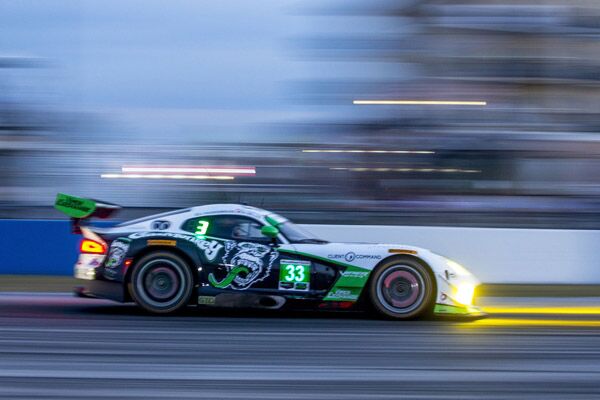 Miller has a lot of experience at Sebring but Saturday marks his first start in the 12-hour race.

“There is something special about coming to a track that makes you work so hard that you feel it several days later,” Miller said. “Sebring makes you do that. It makes you put the work in. It is flat, bumpy and tough on equipment but has so much history that your sore back overlooks it all the next day.”

The No. 33 team moved off to a great start in Thursday’s opening practice day with Bleekemolen pacing both the day and nighttime sessions.

“I think our advantage is that we raced this car here already for two years, so we know how we can get the maximum out of our package,” Bleekemolen said. “This track is so different to Daytona and we will have to see which cars will be competitive. It will be close, that's for sure.”

Keating was the driving force behind the development and production of the Viper GT3-R by Riley Technologies.

“I think Sebring is a track that really likes a GT3 car,” Keating said. “In the previous two years, I felt like Sebring was a place that really favored the Viper. However, now that all GTD cars are in GT3 trim, I feel like it favors all cars. It will definitely be more difficult this year. Some of the other cars were really quick at the recent test. Now, we need to see if they can be consistent over a stint. We have a very good car, but I think the performance level is as close as it has ever been.”

- A Dutch native, Bleekemolen has felt the power of Gas Monkey Garage back home in Europe. “All the buzz around our team with the Gas Monkey Garage on board has been amazing,” Bleekemolen said. “Even in Europe the response is huge. Sebring is always a great race with all the fans around, but it should be even better this year for us.”

- If it is an endurance race, count Keating in. “For me, the attraction of Sebring is a 12-hour race,” Keating said. “I love the long endurance races, the longer the better. I also love the history of Sebring. It has character that really doesn't exist at other tracks.”

- Miller is making his third race start with ViperExchange.com after debuting with the team last year at Le Mans and competing in this year’s season-opening Rolex 24 At Daytona. “I feel extremely fortunate to be part of this team,” Miller said. “Testing went well here and we feel we have a great comfort in the car, but I know the excitement level in the paddock will be over the Gas Monkey Garage Viper GT3-R and the guys coming to the race. It’s great to represent them on track and take part of all the excitement off the track as well.”