Ben Keating and Jeroen Bleekemolen to Co-Drive With Marc Miller
in 2016 Endurance Races; Dominik Farnbacher Joins No. 33 ViperExchange.com Team for Rolex 24 At Daytona 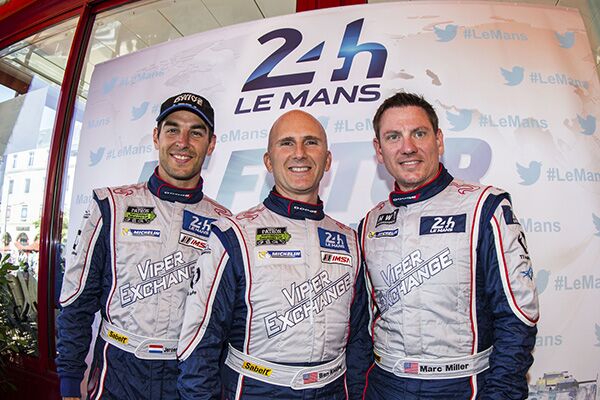 LAS VEGAS, Nevada (November 3, 2015) – Following last week’s news that Ben Keating and Jeroen Bleekemolen will co-drive together for the third-straight year in the 2016 IMSA WeatherTech SportsCar Championship, ViperExchange.com and Riley Motorsports confirmed today that Marc Miller and Dominik Farnbacher will join the Viper duo in next year’s endurance races.

Miller, who co-drove with Keating and Bleekemolen in his 24 Hours of Le Mans debut this past June, returns to the team next season in the No. 33 ViperExchange.com/Riley Motorsports Dodge Viper GT3-R for an expanded schedule that includes the Rolex 24 At Daytona, the 12 Hours of Sebring and Petit Le Mans. Farnbacher will join the trio in the No. 33 at the season-opening Rolex 24.

“When Jeroen and I teamed with Marc last year it was really good but not as good as it could have been,” Keating said. “Being teammates over a long period of time you tend to mesh together. You learn who is really good in the car during different conditions. You learn each person's little quirks and you learn more of how to squeeze a little extra out of the car.”

The Keating, Bleekemolen and Miller driver lineup will also return to the 24 Hours of Le Mans for the second-consecutive year in 2016 if the ViperExchange.com/Riley Motorsports team is granted an invitation to compete in the race by the Automobile Club de l’Ouest (ACO).

“We felt like having the same Le Mans driver lineup together for the longer IMSA races would give us more time to gel together and also give Marc more time in the Viper,” Keating said. “This will make a difference for sure. Whether it is better driver changes, or trying to decide who to put in the car when it is dark and rainy. It is extremely important.”

Miller will be making his Rolex 24, 12 Hours of Sebring and Petit Le Mans debuts next season.
“I don't mind doing things a little backwards,” Miller said. “My first major professional endurance race was the biggest in the world, Le Mans. Now I have the chance to debut at the three biggest in North America as well. I plan on taking the same approach as I did this year. Listen and learn and do what I'm told to do.” 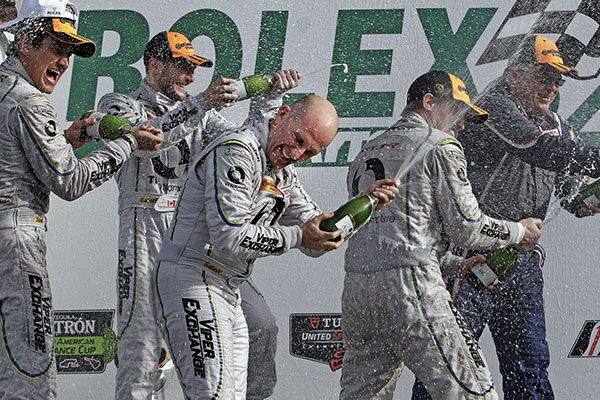 Farnbacher and Keating were among the co-drivers in the team’s sister No. 93 TI Automotive/ViperExchange.com Dodge Viper GT3-R that won the GT Daytona (GTD) class in this year’s Rolex 24 At Daytona.

“I am very excited to have Dominik in the No. 33 for Daytona,” Keating said. “Daytona is where I met Dominik, and it is a special place for us as teammates. I have done Daytona with Dominik in 2011, 2012 and 2013 in a Porsche and then Dom was part of the Dodge GTLM Vipers in 2014. Dom and I drove together again this year at the Rolex 24 and we won the GTD Class. Our 2015 win was emotional because we both know how hard we've worked together to get there.”

Farnbacher came home a winner at Daytona in January in the only North American race the German native contested this year.

“I only did the Rolex 24 this year and that was it for my U.S. program,” Farnbacher said. “I mostly did driving in Germany on the Nürburgring, but I think it will be no issue to be back in a Viper. The Viper Riley Technologies built is an outstanding car which is very drivable and there is probably a lot of updates I will for sure get from my great co-drivers Ben and ‘Jerry.’ I am happy to be in a car with them.”

Bleekemolen is pleased with the across-the-board continuity in both the full-season campaign in the No. 33 with Keating and with the expanded driver lineups for the longer endurance races.
“For me, to have this type of continuity with a racing team, it's very important,” Bleekemolen said. “We all know each other well. In my career, I have switched teams or moved up a lot to different teams, but this is already my third year with the team and I'm happy to be part of it again. I really like working in such a professional environment and I feel very much at home in this team.”

Bill Riley, Riley Motorsports Team Director, feels the driver lineup was a combination of planning and preparation and all of the right elements falling into place.

“It was all pretty natural,” Riley said. “We have a good selection of drivers, Ben and Jeroen are a great full-season pairing, and Jeroen as the lead driver really helps get the car up to speed in a hurry. Dominik is a turn-the-crank guy, he will get in the car and do just an unbelievable job when he is in there. Marc did a great job for us at Le Mans and we will run him in the longer races primarily to get him more seat time in preparation for a return to Le Mans in June. We had the opportunity for some continuity in the longer races which is why we are going this route.” 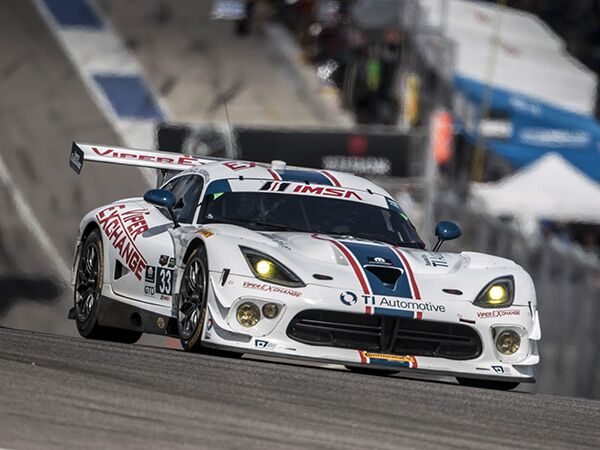 - This year’s Rolex 24 At Daytona victory set the foundation for a successful season that saw the No. 93 TI Automotive/ViperExchange.com entry pick up a second win at Watkins Glen and earn the 2015 Tequila Patrón North American Endurance Cup (NAEC) GTD Championship. Keating and Riley are working hard on a second 2016 effort that would put the No. 93 back on track in next year’s GTD series. “I will know more later this week,” Keating said. “We are working on a few different ideas. We would love to field the No. 93 Viper in the NAEC races again in 2016. We are trying to split the car between two groups. We have one already in place and now we just need to find the other half!”

- Keating, Riley, Miller and fellow team driver Al Carter, who won this year’s NAEC title with his teammates and co-driver Cameron Lawrence, are all in attendance at this week’s 2015 SEMA Show in Las Vegas. Keating and Carter will be signing autographs at TI Automotive’s outdoor exhibition booth (#61039) tomorrow, Wednesday, November 4, from 2 – 3 p.m. The TI Automotive exhibit will also feature the TI Automotive/ViperExchange.com No. 93 in its winning Rolex 24 livery as well as the No. 53 Dodge Viper GTS-R that Keating, Bleekemolen and Miller drove this year at Le Mans. The TI Automotive SEMA Show exhibit is located just outside of the Central Hall of the Las Vegas Convention Center near the Ford track.

- Having Bleekemolen and Farnbacher teamed together in the same Viper for the first time puts two of the top talents in worldwide sports car racing in the same car at Daytona. “I look at our team in the No. 33 Viper and I think it is as good as it gets,” Keating said. “Both Jeroen and Dominik have the unbelievable ability to chase down another car and get around them. It is about so much more than just having a fast car. They both know how to squeeze the most out of a car and take advantage of the places where our car is good. They are also extremely good at taking care of the car, which is the most important in any 24 hour race. There will be a lot of new competitors going into Daytona in 2016. It will be tough, but we have done everything within our power to stack the deck in our favor with this driver lineup.”

- With Miller confirmed as the primary ViperExchange.com endurance driver next season, Bleekemolen’s older brother and two-year GTD endurance-race No. 33 teammate, Sebastiaan Bleekemolen, doesn’t currently have a seat with the team. Sports car racing’s driver ranking system played a factor. “Sebastian is a Pro,” Keating said. “He has done an amazing job for us for two years now. If we could've figured out a way for Sebastiaan to become a bronze-rated driver, then we would have never gone looking for anyone else. I expect that we will probably team up again at some point.”

- Miller and all on the ViperExchange.com team would love the chance to go back to Le Mans. “There is never a guarantee to get the invite for Le Mans, but like this past season, if you want to have a shot at winning the preparation starts now,” Miller said. “After watching the podium celebration, standing in plain clothes this year, all I could think about is how I can get back for another chance at being up there. I know everyone else on the team was feeling the same way, so I hope that opportunity comes back for the entire team.”