No. 93 and No. 33 Dodge Viper GT3-Rs One-Two in NAEC GT Daytona After Dramatic 12-Hour Classic Saturday in Florida

After winning the season-opening Rolex 24 At Daytona, the No. 93 TI Automotive/ViperExchange.com team, and its sister No. 33 Viper GT3-R entry, came to Sebring looking for a “Florida Sweep” of both Sunshine State endurance races.

The No. 93 team, and its Sebring driver lineup of Marc Goossens and Rolex 24-winning drivers Ben Keating, Al Carter and Cameron Lawrence, were also determined to defend and extend an early-season lead in the NAEC in the challenging 12-hour race.

When the checkered flag flew at 10:40 p.m. EDT this past Saturday night after one of the hottest and most competitive 12 Hours of Sebring in a decade, the No. 93 remained atop the NAEC standings after a hard-earned fourth-place finish.

Adding to the accomplishment, the No. 33, and drivers Keating and Jeroen and Sebastiaan Bleekemolen, won the first of the race’s three points-paying segments and earned second-place points at the eight-hour mark to jump to second in the overall NAEC GTD rankings, just behind their teammates. 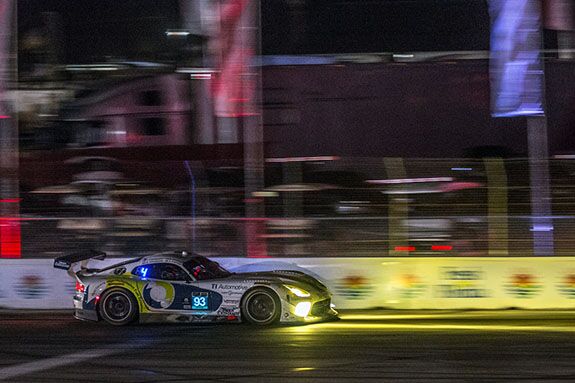 The No. 33 team nearly pulled off the GTD class race win in total, leading with less than 10 minutes to go after Jeroen Bleekemolen made a late charge to the front. Victory seemed imminent only to have the No. 33 slow and finish in the pits after an over-heating issue related to a damaged radiator finally took its untimely toll just five minutes from the checkered flag.

“In these first two races down in the Sunshine State we were going for the Florida Sweep,” said Al Deane, TI Automotive Chief Technology Officer. “That’s 36 hours of some of the most grueling endurance racing. We came within 35 hours and 55 minutes of pulling this one off in a big sweep, but unfortunately we had some debris that went through our radiator and caused some overheating problems on the No. 33 but we are still so thrilled about what the team did. The cars looked great, the drivers were amazing and it was really fun racing with and chasing down the other leaders all day.”

Keating, who drove both TI Automotive/ViperExchange.com entries at Sebring, as he did at Daytona in January, left the race encouraged by the team’s strong showing despite the disappointing end to the No. 33’s day. He was also once again impressed with the performance of the TI Automotive systems being used for the first time this year on the Vipers.

“I would have loved to have finished the race in front,” Keating said. “Turns out we ended up hitting some debris, which punctured our radiator, but obviously, we had two really fast cars, and the team did a great job. It was far and away the hottest Sebring I have been to and, whether it was fuel strategy or HVAC strategy, the partnership with TI Automotive is just incredible.”

Part of the No. 33 driver lineup at Daytona, Goossens made a significant contribution in his switch to the No. 93. He was one of seven drivers, along with Jeroen Bleekemolen, that battled in a tight train of GTD cars in the race’s final hours, the group rarely separated by more than 30 seconds. Goossens turned the No. 93’s best race lap just six laps from the finish – later than any other competitor in the race – and used that quick pace to recover from a refueling miscue on the No. 93’s last scheduled pit stop. 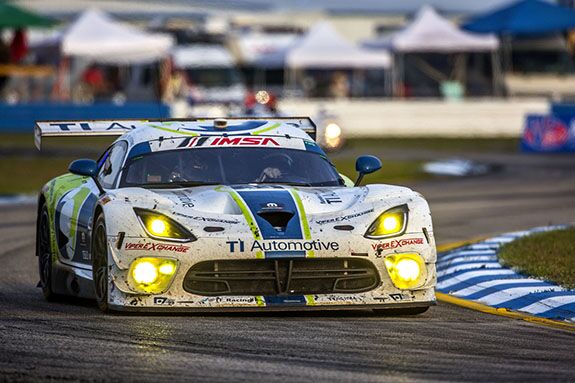 “This whole team never quits, we have seen that before, we have seen the team come back from last place on the grid at Daytona to win,” Goossens said. “We kept coming back throughout the race and, at the end of the day, the guys did a good job, Cameron drove a very strong race, and to get away from here with P4 is pretty good. It’s valuable points for the NAEC.”

After qualifying driver Keating drove the opening stint in the No. 93, Goossens, Lawrence and Carter took over for the balance of the race. A pair of pit speed violations dropped the No. 93 down a lap at mid-race but all three drivers later followed some heads-up strategy calls by the TI Automotive/ViperExchange.com/Riley Motorsports team to get back on the lead lap hours before the finish.

“The NAEC is our main goal and focus,” Carter said. “We executed perfectly at Daytona, these races are so tough and competitive, and in this one we had a couple of issues, but we kept digging. This TI Automotive Viper team puts together a nice car on the track and we drive them hard and we drive them well. We battled hard all day and this team will be a threat all year.”

Lawrence, in just his second major endurance race after winning in his 24-hour race debut at Daytona, turned in another solid performance at Sebring.

“We are very happy with a P4 after the long, tough day we had,” Lawrence said. “Everybody drove very well, we started working our way up right away, kept getting closer and closer to the front. We could have definitely had a podium but to get fourth after all we went through is not bad.”

The No. 33 team was hoping to shake off the disappointment of a DNF (Did Not Finish) at Daytona with a Sebring victory and nearly pulled it off. Jeroen Bleekemolen set the tone for a winning weekend on Friday when he won the pole with a new GTD track record, and then joined his brother and Keating in backing up the strong qualifying effort in the race. 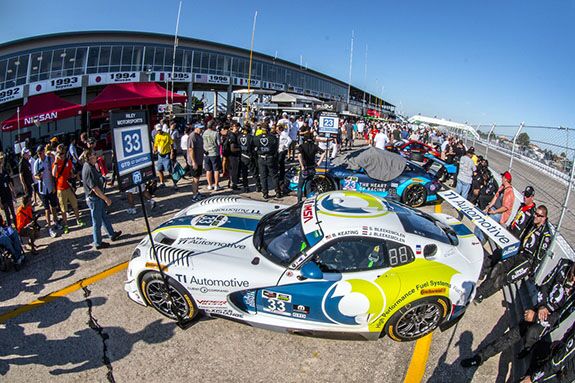 “We led many laps, Ben did a great job, my brother drove a great race, we had the pace and we had the car,” Jeroen Bleekemolen said. “Then in the end it got really close, there was a few times I was a bit unlucky fighting some GT Le Mans cars that had issues, so I lost some time, but we still took the lead seven or eight minutes before the end. Then the engine went just five minutes before the end, it got too hot, and we later found a small hole in the radiator probably caused by some debris earlier in the race. On the last stop I saw it coming because the windscreen was full of water, I had very bad visibility. It was like a fairy tale finish and then it breaks down.”

“We had a good race, we were fast and picked up some good Endurance Cup points,” Sebastiaan Bleekemolen said. “We were always fighting for the lead and had it with five minutes on the clock. It’s very disappointing, especially after Daytona, we were fighting for the win as well over there and then leading here, almost to the end. I can’t believe it.”

Next up for ViperExchange.com, TI Automotive and Riley Motorsports is GTD Round 3 of the 2015 IMSA TUDOR United SportsCar Championship at California’s Laguna Seca Raceway, May 1 – 3. That event’s featured Continental Tire Monterey Grand Prix can be seen live on FOX Sports 1, Sunday, May 3, at 4 p.m. EDT/1 p.m. PDT.

- As he did in Daytona, Keating led multiple laps in each of his first two stints in the No. 33, passing on track for the lead and frequently keeping pace with higher ranked professional drivers. “The beautiful thing about GT Daytona is that it is a Pro-Am setup,” Keating said. “The ‘Am’ drivers have a requirement to drive a minimum drive time, which for Sebring was three hours. Even though you have very different levels of drivers everybody has to get in their minimum time. I am really happy with my personal driving time today. I think I drove somewhere around five hours between the two cars and it was extremely fun. My first double stint I led for most of it. I came out from a yellow flag in fifth place, I knew the four guys in front of me, and I felt like I could compete with them. To get out front and lead for almost two hours was awesome.”

- An Orlando, Florida resident, Lawrence always enjoys competing at Sebring, one of his “home tracks.” "I think that the history behind the track is a huge part of the love and enjoyment of racing at Sebring,” Lawrence said. “The track has such a rich history, both in racing and non-racing, it is just a cool experience to be here and race here. I also enjoy it because of the challenge of the old, bumpy track. It puts more pressure on the drivers and takes skill to run fast and be consistent and I enjoy the challenge.”

- Even as natives of the Netherlands, Jeroen and Sebastiaan Bleekemolen appreciate the unique history and heritage of Sebring. “Tracks and events with a long tradition are always more special, especially when conditions in general are challenging,” Sebastiaan Bleekemolen said. “I really like these old school tracks! Much better than the new F1 tracks with all the run off areas. At Sebring, you can’t afford it to make any mistakes. That’s how racing should be!”