Another Last-To-First Victory for ViperExchange.com and TI Automotive at The Sahlen’s Six Hours of The Glen

the No. 93 to the win, overcoming a last-place grid position and all-day rain showers for another dramatic victory in an iconic North American sports car endurance race. 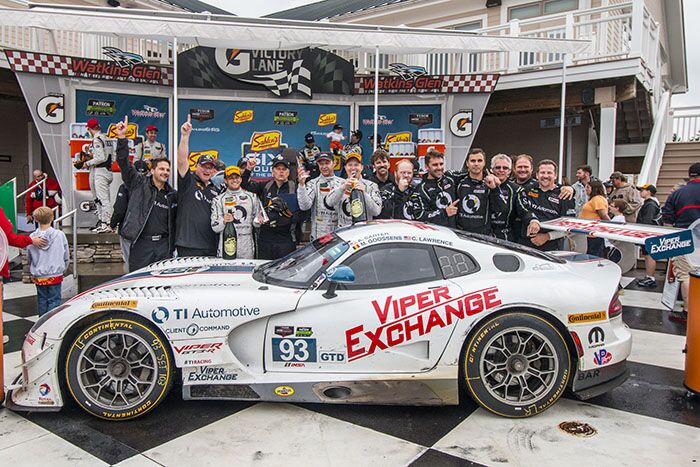 In January, Carter and Lawrence joined Ben Keating, Kuno Wittmer and Dominik Farnbacher in a come-from-last victory in the same No. 93 Viper in the season-opening Rolex 24 At Daytona. In that race, the No. 93 started at the back of the field after the team elected to change tires after an incident in qualifying.

Today, the No. 93 rolled off from last after Saturday’s qualifying was cancelled due to the persistent rain showers that settled in on the Watkins Glen area the last two days. The starting grid was determined by season-long championship points, but the No. 93 is contesting only the four-race Tequila Patrón North American Endurance Cup this year and has minimal TUDOR Championship full-season points.

The Glen was Round 3 of this year’s NAEC “championship within a championship” that showcases North America’s four premier long-distance races: The Rolex 24, 12 Hours of Sebring, Sahlen’s Six Hours and Petit Le Mans, which closes out the 2015 racing season this October at Road Atlanta.

“I love the Patrón Endurance championship,” Carter said. “That’s our goal right now, we are looking pretty good heading to Petit Le Mans in a few months, and we will look for another mistake-free race. We scored points for leading at the three-hour mark and at the end today, but it’s not that easy. We had a lot going on at two hours and 45 minutes to put us in that position, but this team knows exactly what they are doing.”

Both the No. 93, and the team’s sister No. 33 ViperExchange.com/TI Automotive Dodge Viper GT3-R, driven by Keating and Jeroen Bleekemolen, were cautious but competitive right from the start of the race.

The wet-weather conditions caught more than one competitor out, but the No. 93 avoided any major trouble despite having to test the odds several times.

"I stayed out for like 30 minutes in the wet on slicks but the guys were watching the weather closely and luckily we had warm tires,” Lawrence said. “I think it was the right call it helped us a lot with pit stops and really allowed us to jump up to the front late in the race."

Goossens drove the No. 93 to the finish, overcoming some of the heaviest rain of the day in the race’s final hour. Race officials even stopped the on-track action in the late stages when the standing water from the downpour made it too unsafe to continue. 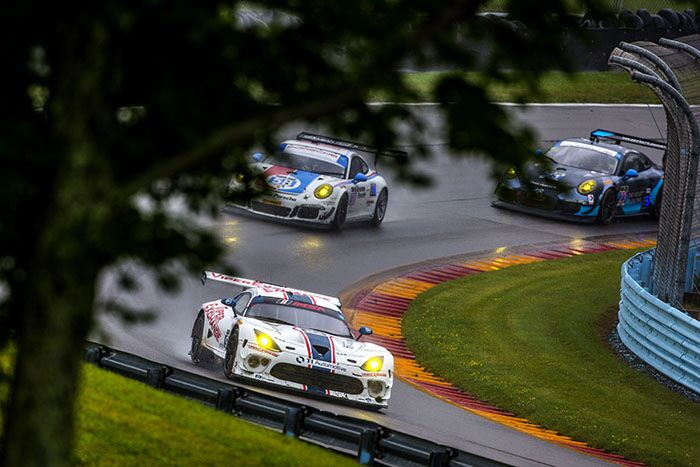 “It was a pretty good call from IMSA because we started hydroplaning and visibility was very poor,” Goossens said. “When we were racing, it was very difficult, which makes this victory even more special. The team is on a good momentum and, I think for myself personally, after competing with the GTLM team and developing the GT3-R for Riley Motorsports, it is a pretty good feeling to get this win. It's good to be part of it."

The win extended the No. 93’s lead in the NAEC. Both the team, and Lawrence and Carter, now have 37 points in their respective championships, seven points ahead of the second-place teams and drivers.

The No. 33 was also competitive at The Glen and finished sixth in the GTD category after rebounding from a brief off-track incident.

“We had a good car, we have a really good car in the difficult conditions, and today we definitely had difficult conditions, so the strategy was really the big thing to play out,” Keating said. “Unfortunately, I went wide in a turn thinking that I had two cars inside of me, hit the rumble strips, lost grip and went into the grass a little bit. I took a pretty big chuck out of the grass, with a lot of mud packed in there, so unfortunately that took two pit stops and went a lap down.”

The team and closing driver Bleekemolen eventually managed to get the lap back and improved to sixth by the checkered flag as other GTD teams ran into trouble in the late going.

"We lost a lap, or a bit over a lap, we tried to get it back all race long and then in the end we finally got there, but we were running out of time and came back from last to sixth. Pace was good, especially when I ran on slicks in the wet, but it was still a hard day for us."

Next up for the ViperExchange.com/TI Automotive/Riley Motorsports team is the Northeast Grand Prix at Lime Rock Park, in Connecticut, July 24 – 25.