ViperExchange.com/TI Automotive Winning Together On and Off the Track 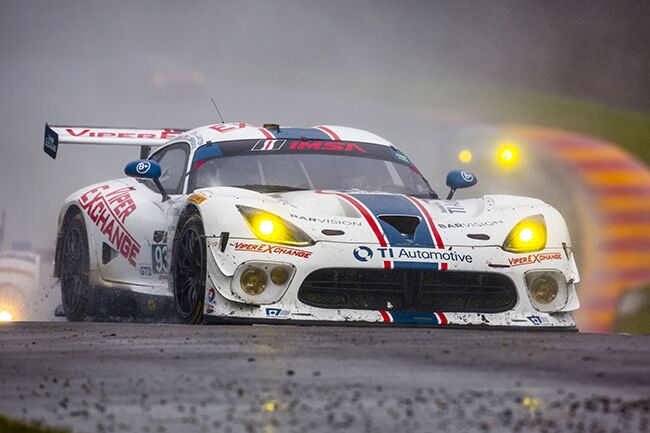 Carter, Lawrence and the No. 93 ViperExchange.com/TI Automotive squad came into the six-hour endurance race at Watkins Glen International with a three-point lead in the Tequila Patron NAEC GT Daytona (GTD) driver and team standings.

After winning The Glen race, in which Marc Goosens also co-drove the victorious Viper, Carter, Lawrence and the No. 93 team left The Glen seven points ahead of the competition in both NAEC championships. They scored a perfect 10 points at The Glen, leading at the three-hour mark and taking the GTD checkered flag to build a 37 - 30 lead over the nearest challengers heading into October's Petit Le Mans at Road Atlanta, the fourth and final NAEC round of the season.

In addition to The Glen victory, the No. 93, with Carter and Lawrence co-driving with Ben Keating, Kuno Wittmer and Dominik Farnbacher, also won January's season-opening Rolex 24 At Daytona. The victories were split by a fourth-place finish in the 12 Hours of Sebring in March where Carter and Lawrence first co-drove with Goossens.

The Glen victory was all the more memorable in that it marked the second time this year that the No. 93 team and drivers won an endurance race from dead last in the starting field. In January at Daytona, the No. 93 started at the back of the overall field after the team elected to change tires after an incident in qualifying.

At The Glen, the No. 93 was relegated to the back of the overall grid after qualifying was rained out. The field was set by season-long championship points, but the No. 93 is contesting only the four-race NAEC this year and has few IMSA TUDOR Championship full-season points.

The team and technical partner, TI Automotive, are proud of the “Last-to-First” double but don’t plan on making it a habit.

"We have completed 42 hours of some of the most challenging endurance races in North America," said Al Deane, TI Automotive Chief Technology Officer. "Both wins, and our intimidating performance at Sebring, prove that we teamed with championship-level drivers, race cars and crews." 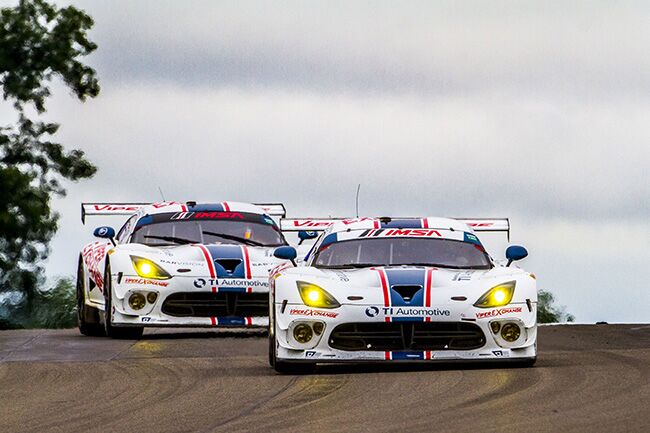 Both the No. 93, and the team’s sister No. 33 ViperExchange.com/TI Automotive Dodge Viper GT3-R, driven by Keating and Jeroen Bleekemolen, played it cool and cautious in the early stages of The Glen race, which was plagued throughout with rainy and wet conditions. The winning No. 93 Viper didn’t even lead the at The Glen for the first time until just past the two-hour and 30-minute mark, roughly the length of a typical IMSA TUDOR Championship sprint race. The steady ascent to the front was all part of a plan for the No. 93 that Lead Engineer, Matt Bejnarowicz, Team Manager, Greg Jones, Data Engineer, Chris Miller, the drivers and crew executed to perfection.

"Matt Bejnarowicz and Greg Jones had a plan for the 93 and how to operate it, I think they just stuck to it and, of course, Chris Miller kept them in line,” said Riley Motorsports Team Director, Bill Riley. “They just stuck to it, marched through their plan and it worked for them, it all clicked. It is good to get another Patrón win and get that car a little farther ahead in the points.”

The No. 33 was also competitive at The Glen, and Keating (center in picture below) and Bleekemolen finished sixth in GTD after rebounding from a brief off-track incident. The No. 33 team will look to shake off a challenging and unlucky year so far in the second half of the 2015 IMSA TUDOR Championship GTD season, but Keating couldn’t be happier for the sister No. 93 team’s success.

“I'm excited for the 93 car,” said Keating, principal of Viper Exchange and one of the winning co-drivers from Daytona. “They were in the lead for the NAEC points and built on it with maximum points at The Glen, which was their goal, first at the three-hour mark and first at the six-hour mark. Same group of guys, Cameron and Al won in Daytona, and it is just so exciting for them, just a great group of guys. Marc did an unbelievable job in crazy difficult conditions and I am just so proud of them. As a team, we are representing Viper, Viper Exchange and TI Automotive extremely well. We are excited that the Viper is still the front runner in the NAEC, and excited for TI Automotive and all of the cool stuff they've done to help us develop our cars." 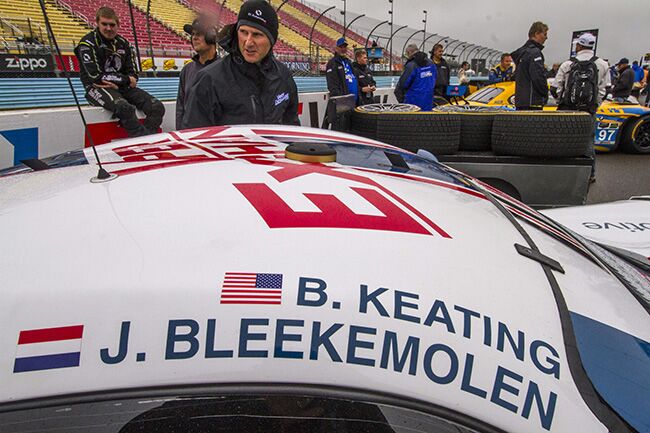 TI Automotive Technology for the Track

TI Automotive is in the first year of a marketing and technical partnership with both ViperExchange.com and Riley Technologies, which built and continues to develop and race the Viper GT3-R through its affiliated Riley Motorsports entity. The new partnership came home a winner its first time out at Daytona and again two weekends ago at The Glen. The real victory in the partnership, however, is in the performance advances the team has realized using TI Automotive systems and technical components on its Viper race cars.

“The reliability of the fluid systems has been awesome as evidenced by our win in the Rolex 24 At Daytona and the victory at The Glen,” Keating said. “Endurance racing really shows that you need to balance engine power and efficiency. TI Automotive’s improvements to our fuel and HVAC systems are more efficient, working better than they have in the past. This is a win-win-win, and that is our plan for this partnership.”

TI Automotive Technology for the Street

Keating's Viper Exchange based in Tomball, Texas, is the world’s largest Dodge Viper retailer. In addition selling both new and pre-owned Vipers, ViperExchange.com has also led the development of many after-market, high-performance components for Vipers. One of the latest projects has been in partnership with TI Automotive.

“I've even been able to work with TI Automotive on some fun, after-market items for street car Vipers,” Keating said. “We are building a supercharger that will boost the Viper up to about 900 horsepower, but the fuel system was the limiting factor. That is, until TI Automotive got involved and developed a solution that fits right within all of the stock components. Really cool stuff.”

Keating and Riley Motorsports won the 2014 Tire Rack Ultimate Track Car Challenge presented by Grassroots Motorsports in a Viper GT3-R and will defend their title at Virginia International Raceway on Friday, July 17.

For the open-competition event, Keating and Riley plan to again remove the IMSA-mandated engine air restrictor, which will allow the Viper V10 to reach its full potential, churning out somewhere in the neighborhood of 680 horsepower.

“We really try to go back to the GT3-spec car that the GT3-R started life as,” Keating said. “Last year it really didn’t make sense have the ABS on, so we left it off. We put the GT3-spec rear wing on it, as well as the rear-wheel speed sensors, and we turned on the traction control. It really was a ton of fun and should be again. We are looking forward to getting back to VIR and defending our overall title.”

In addition to being the Tire Rack Ultimate Track Car Challenge Champion, Keating also earned the designation as the Fastest Track Star in the 2014 event. His best lap in the Viper GT3-R was more than eight seconds faster than the next nearest competitor. 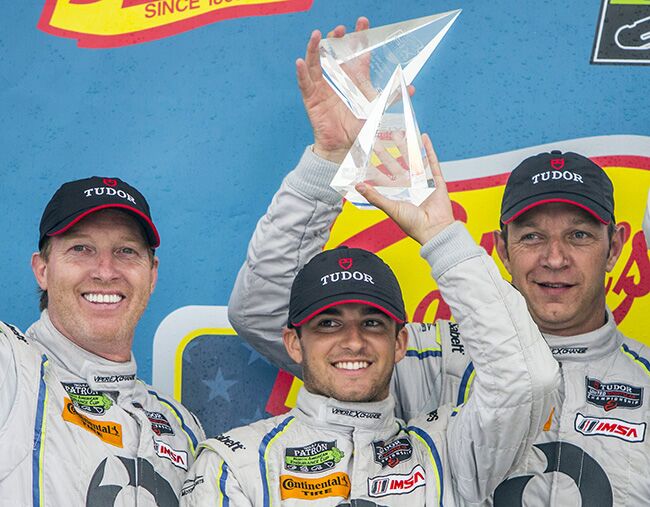 In the first half of 2015 alone, Lawrence (center in picture above, with Carter to his right and Goossens to his left) has already put together a season any driver would love to have in a full year of competition. In addition winning the Rolex 24 and Sahlen’s Six Hour in his first attempts, Lawrence also won the first three Trans Am TA2 races of the year in a MOPAR Dodge Challenger. He defended his TA2 championship lead this past weekend with a fourth-place finish in the Trans Am Independence Day Classic at Brainerd International Raceway in Minnesota.

"It's definitely a dream, the first season in the Viper, first season with the Riley Motorsports team in the IMSA TUDOR Championship,” said Lawrence, the two-time and reigning Trans Am TA2 Champion. “I came in as a learning experience and I just think it speaks to how good this team is, because I'm still the new guy and still learning, but they just give us such good equipment to race, good strategy and good teaching for me. I get to learn a lot from them, and when you're working with the best, I guess things come together and the right things just happen. It's not like we've done anything special or different than anybody else. We just work hard, stay focused and execute, do what we can, and hopefully it works out, and it has twice now."

Next up for the ViperExchange.com/TI Automotive/Riley Motorsports team is the Northeast Grand Prix at Lime Rock Park, in Connecticut; July 24 - 25.