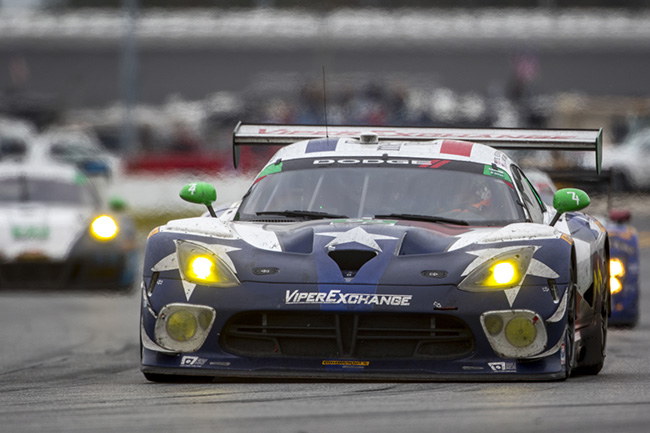 DAYTONA BEACH, Fla. (January 31, 2016) – The No. 93 “Don’t mess with Texas” #TeamTexas ViperExchange.com Dodge Viper GT3-R was driven to a hard-earned third-place finish in the GT Daytona (GTD) class in this weekend’s Rolex 24 At Daytona.

Co-driven by Ben Keating, Jeff Mosing, Eric Foss, Gar Robinson and Damien Faulkner, the #TeamTexas entry improved three positions in the race’s final hour to reach the Rolex 24 GTD podium for the second year in a row. The same No. 93 Viper was driven to the GTD victory by Keating and other teammates in last year’s Rolex 24.

The No. 93’s sister entry, the No. 33 Gas Monkey Garage Energy Dodge Viper GT3-R, finished 10th in the Rolex 24, which made the Bill Riley and Riley Motorsports-run ViperExchange.com effort the only two-car team in GTD to place both of its entries in the top-10 in the challenging twice-around-the-clock race. Keating, Jeroen Bleekemolen, Dominik Farnbacher and Marc Miller co-drove the No. 33.

TAn Irishman, Faulkner was made an honorary member of the Lone Star State for the Rolex 24 by his four Texas teammates. He proved deserving of the honor with a competitive and flat-out run to the finish in the race’s final hours.

“To be honest, to be fair to the team, they just let me get on with the job at hand,” said Faulkner who pulled a two pit stop "triple stint" in the run to the checkered flag. “We saved a bit of fuel on the second to last stint so after the final stop the crew told me I could go flat out. They nailed the calculations and I went to reserve fuel on the last lap. I am sure the car wouldn’t even start right now, it is empty. If we had been given this podium before the weekend we would have taken it. Hats off to my teammates, Eric, Jeff, Gar and Ben, they drove flawlessly.” 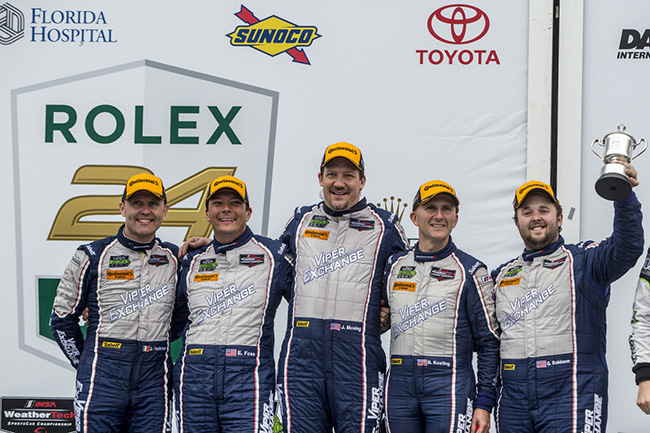 Mosing first drove the No. 93 in a one-off race last May at Laguna Seca.

“When Bill Riley and Ben Keating requested if I'd be able to race with them this year at the Rolex 24 I was elated to have the opportunity,” Mosing said. “The team has had so much success in the past, they know this place like the back of their hand, and I knew they would execute a program that had a chance to get on the podium.”

“It's just always a pleasure to be able to run in the Rolex 24 At Daytona,” Foss said. “The fact that we somehow podiumed in our only two races here is pretty amazing. The first one wasn't quite as difficult in many, many facets. This one I feel is much more deserved, a well-earned podium. This was the first chance I've ever had to run with an operation the caliber of Riley Motorsports and it just shows in every single area. Everyone is just so good at what they do.”

Robinson, who turned 21 earlier this month, impressed in his Rolex 24 debut. He is the reigning Trans Am TA2 Champion and Rookie of the Year.

“The team is fantastic, Bill Riley is pretty much the king of all the teams running at the Rolex 24,” Robinson said. “Ever since I had a memory of here, Bill’s name has always been synonymous with this race. I really came into this race expecting it to go as smoothly as it did.”

Making the podium in the No. 93 for the second year in a row wasn’t the only eventful part of Keating’s race. He was also at the wheel of the No. 33 when he had an off-course incident in the Daytona infield late Saturday night.

“The fact that we finished in the top 10 in the 33 car is truly a testament to the team,” Keating said. “Unbelievable job by Riley. I feel like a heel to be the one to have put it into the tires. I think it took five laps for the safety team to get me to the garage, we went down 10 laps in total, so that means it took only five laps for the Riley guys to replace all four brakes, all four wheels and tires, the front bumper, rear bumper, hood, door and rear quarter panel.” 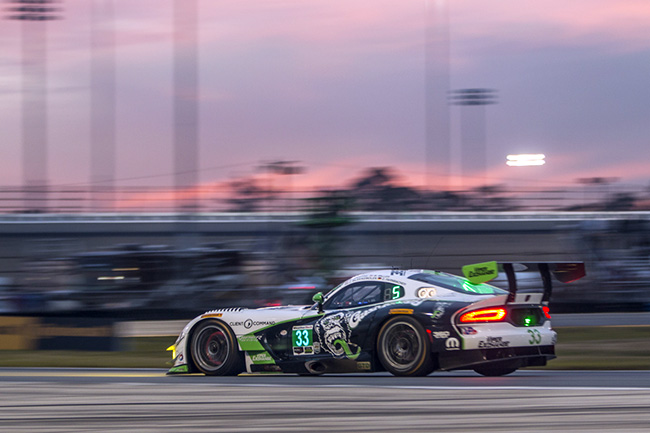 A silver lining to the incident was the mass of people that gathered around the ViperExchange.com garage to watch the rapid-fire repair. Vipers have always been crowd favorites but the addition of the Gas Monkey Garage Energy drink livery at the Rolex 24 added a whole new level of mainstream awareness.

“There must have been over 100 people in the garage watching the repair,” Keating said. “When I was told to get my butt in the car and we started it up, we backed it up and the whole crowd cheered. It was pretty cool and the video is all over social media.”

Keating’s full-season teammate, Jeroen Bleekemolen, was also impressed with the Riley repair job on the No. 33.

It was amazing to see what they did in the night to repair the car,” Bleekemolen said. “It was really like one of those moments where I just couldn't believe it. I've seen this at Le Mans with the Audis when they crash and they pull them into the garage. The cars were destroyed and they would come out in like 10 or 15 minutes like a brand new car. That's the feeling I got from this, like a big factory team effort, incredible.”

Miller made his Rolex 24 debut even though he co-drove a ViperExchange.com Viper GTS-R at the 24 Hours of Le Mans with Keating and Bleekemolen last year. He enjoyed the return to the Riley Motorsports-run team.

“Getting out of the car after a stint, just looking at the Riley guy’s faces and seeing this look of ‘hey you did alright, good job, nice, thumbs up,’ makes me feel like we are going in the right direction,” Miller said. “It was a great experience and I couldn’t have asked for a better Rolex 24 At Daytona experience, other than finishing where I think we could have finished.”

Next up for ViperExchange.com and the IMSA WeatherTech SportsCar Championship is the 12 Hours of Sebring, March 16 – 19, at Sebring International Raceway.

T- The #TeamTexas livery on the No. 93 seemed to be almost as popular as the Gas Monkey Garage colors on the No. 33. “The livery of the car has gotten a ridiculous amount of press,” Keating said. “I even got an email from the State of Texas wanting to know what I'm doing with their ‘Don't mess with Texas logo!’ I’ve gotten a lot of love from the Texas livery, and it was just fun to have four Texans driving on one team along with a token Irishman with some new cowboy boots.”