Their GT Daytona (GTD) class debuts gives the close friends and longtime competitors a chance to race together for the first time and, for the Le Mans 24 Hour-bound Miller, some valuable experience in a V-10 Viper race car.

Miller was recently named to co-drive with Ben Keating and Jeroen Bleekemolen in the No. 53 Dodge Viper GTS-R in June’s 24 Hours of Le Mans. The Monterey Grand Prix at Mazda Raceway Laguna Seca offered an ideal opportunity for Miller to get familiar with the Viper and the nuances of multi-class Prototype and GT class racing, and Mosing stepped in to make it happen.

“I have been wanting to team up with Marc for years on something, and for it to be at Mazda Raceway Laguna Seca as a primer for him to run at Lemans is just awesome,” Mosing said. “Marc has been one of the key people and friends in my driving career that has made me what I am. I'm really looking forward to it.”

Mosing and Miller will co-drive the No. 93 Viper alongside the full-season No. 33 ViperExchange.com entry driven by Keating and Bleekemolen. Both Vipers are prepared by Riley Motorsports, the same team that will run the Le Mans effort less than two months from now.

“For me, I see this as an amazing opportunity to learn more about the car from both Ben and Jeroen,” Miller said. “They both have so much experience to pull from. My focus will be getting comfortable with new surroundings and Prototype and GT class traffic situations.”

The No. 93 is the same Viper that Keating and teammates drove to victory in the season-opening Rolex 24 At Daytona and a fourth-place finish last month in the 12 Hours of Sebring. 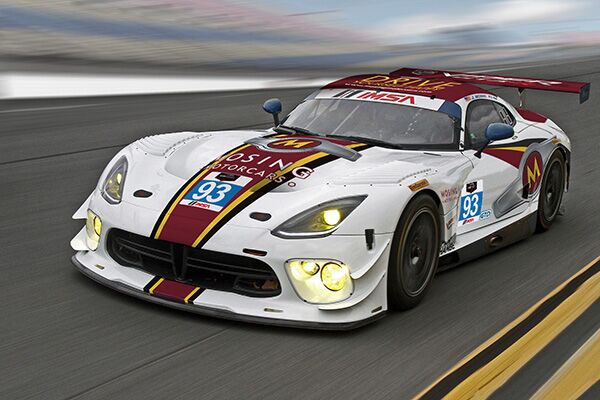 The entry was originally scheduled to participate only in the four race Tequila Patrón North American Endurance Cup (NAEC) with sponsor TI Automotive but was quickly pressed into service by the Riley Motorsports team for Mosing and Miller at Monterey.

“This will be my first effort in a GTD car and I'm very excited to be running with Bill Riley and Ben Keating,” Mosing said. “Bill is arguably the best engineer in the paddock and, as a personal owner of a Launch Edition Viper, I can only imagine what the race car is like. “It's going to be a blast!”

While the No. 93 comes to Monterey atop both the IMSA TUDOR Championship and NAEC standings – which resumes at Watkins Glen and Road Atlanta later in the season – earning championship points is not what next weekend’s race is about.

“I am especially pleased that both the 33 and 93 Vipers will be on the grid,” Miller said. “I know many of the team members on the ViperExchange.com/Riley Motorsports team, but working with them more heading into Le Mans will be an invaluable opportunity. This race is a great opportunity to learn all I can about racing at this level in preparation for Le Mans and I am grateful to Jeff, Ben and everyone at Riley who helped make it happen.”

“The fact that I will be splitting time between my normal CJ Wilson Racing program in the Continental Sports Car Challenge with this amazing opportunity will add some stress but it is not a challenge I would shy away from,” Miller said. “I want to perform well in both paddocks and my focus will be just that. Considering I was in the Radio Lemans booth talking about racing one race ago, and now going to Mazda Raceway Laguna Seca going back and forth between the TUDOR and Continental Tire paddock is a dream I don't want to soon wake up from.”