AUSTIN, Texas (September 17, 2015) – – Ben Keating, Jeroen Bleekemolen and the No. 33 ViperExchange.com/Riley Motorsports Dodge Viper GT3-R team returns to its home-state of Texas this weekend ready to defend its 2014 victory in Saturday’s Lone Star Le Mans at Circuit of The Americas. 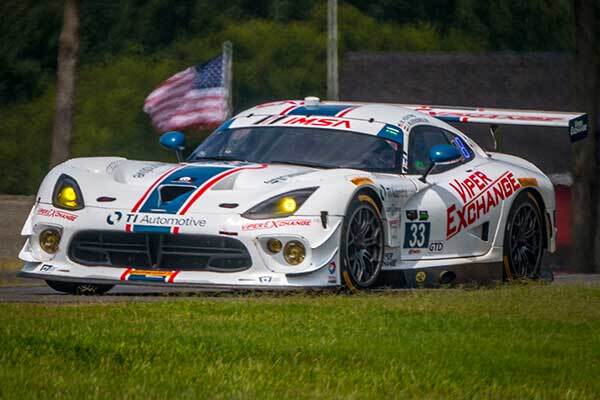 Keating, Bleekemolen and Viper Exchange – headquartered in Tomball, Texas in the greater Houston area – scored their second of two 2014 victories last year at Circuit of The Americas. Texas-native Keating, the principal of Viper Exchange, is actually looking for his third-straight Circuit of The Americas victory after first winning at the track in IMSA ALMS GTC competition in 2013.

The team and drivers are typically positive returning to Texas but some recent rules adjustments may make another win a tough task this weekend. Although IMSA has allowed the team to run a larger engine air restrictor after some performance-sapping restrictions one race ago at Virginia International Raceway (VIR), the Viper remains the heaviest car in the GTD division.

“I have spent a bunch of time telling my guests and fans not to expect a three-peat although there definitely is something special about racing at home,” Keating said. “With the recent changes to the IMSA Balance of Performance (BoP), I think the Viper will be more competitive than it was at VIR, but we will need some serious luck to win again. Definitely more positive than at VIR, excited to be racing at home, excited to be racing at a place where I've had so much success, and, cautiously optimistic that we could have the perfect race and be in contention for a podium at the end.”

Built for Formula 1, Circuit of The Americas (COTA) is a long 3.4-mile course with 20 turns.

“Based on the current package we have, we are 55 pounds heavier than when we won at Road America two races ago,” Keating said. “Over the length of a lap, and in a 50 minute-stint on tires, the weight makes a big difference. You can't escape physics. Circuit of The Americas is a track where the extra weight could make a large difference with long, narrowing esses and the big brake zones.”

Even with the challenge at hand, Bleekemolen, a native of Holland, is happy to be back in Austin.

“It's great to go back to COTA,” Bleekemolen said. “I always enjoy it there. Defending the win won't be easy for sure, but that is what we are going to try hard for. We will be more competitive then we were at VIR, which is great. With extra weight we don't know exactly where we stand but it will make our lives tough, but we will be even happier if we do well.” 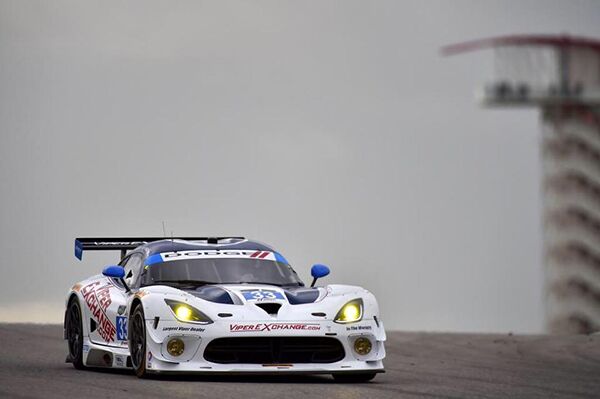 Official IMSA TUDOR Championship action gets underway today, Thursday, September 17, at COTA with morning and afternoon practice sessions. Friday features a third and final one-hour practice session at 9:10 a.m. CDT with GTD qualifying that afternoon at 3:45 p.m. CDT. Race-day Saturday starts with a 20-minute warm-up at 8 a.m. CDT before the 11:35 a.m. CDT start of the two-hour and 40-minute race.

While the Viper GT3-R’s weight literally remains a heavy issue, IMSA’s reversal on the smaller restrictor the team had to run at VIR is a step in the right direction. “This makes a HUGE difference,” Keating said. “With the previous smaller restrictor, we were totally uncompetitive. At least now we might have a chance to compete. In reality, we are talking about .7 seconds per lap difference. I still expect us to be off the pace of the faster cars in the class at COTA, but I am hopeful that we can at least fight for position, rather than being a sitting duck like we were at VIR.”

- The state-of-the-art COTA track’s signature feature is an up-hill run into Turn 1, which is a hard, lefthander that quickly narrows into one racing lane. “It's always special to go through Turn 1,” Bleekemolen said. “Some tracks have their famous corners and Turn 1 at COTA is one of them. Everyone knows them and it's great to watch the cars go through.”

- Other sections of COTA are Keating’s favorites. “Interestingly enough, Turn 1 is not my favorite,” Keating said. “Yes, you get some incredible braking in the uphill with all that force pushing your tires into the pavement. It is also very risky when you get to the top and all of that grip goes away instantaneously, but Turn 1 is really a tight, single file turn and I prefer turns where you can fight side-by-side. My favorite parts of the track are the Downhill Esses and the Carousel Turn. The Esses are so fast and so open, they invite you to attack them, but they get tighter and tighter as you get down into them and any mistake can cost you dearly. I love that risk/reward equation there. Then the big, long Carousel is fun because the track falls away from you at the end, which makes it difficult. But when you hit it right, you can be full throttle from the middle of the turn all the way through the exit. It is blind and it will get your blood pumping. When you get it right, it is awesome.”

- A new Viper GT3-R team is debuting at COTA this weekend in GTD and Keating couldn’t be happier. The No. 80 ACS Manufacturing/Lone Star Racing Dodge Viper GT3-R will be driven by Dan Knox and frequent ViperExchange.com teammate and race-winner, Marc Goossens. “I really enjoy having another Viper there,” Keating said. “In fact, I wish there was an entire field of Vipers. I really believe we have one of the best teams, best engineers, best drivers and best all-around efforts. I want to race against the best. I love the competition.”