No. 33 ViperExchange.com/Riley Motorsports Viper GT3-R Team Looking for a Result Reflective of 2015 Performance in Monterey

Round 3 of the 2015 IMSA TUDOR United SportsCar Championship for the competitive GT Daytona (GTD) class, the Continental Tire Grand Prix of Monterey can be seen live on FOX Sports 1, this Sunday, May 3, at 4 p.m. EDT/1 p.m. PDT
The No. 33 Viper GT3-R was among the fastest and most competitive GTD cars in the year’s opening races at Daytona and Sebring only to have mechanical issues knock the team from winning contention at both races. The blow was particularly tough in Sebring’s 12-hour race in March where a punctured radiator sidelined the No. 33 with Bleekemolen leading just five minutes from the finish.

The No. 33 was also leading January’s Rolex 24 At Daytona when an obscure electrical issue early Sunday morning took away any shot at the race win. The sister No. 93 TI Automotive/ViperExchange.com Viper GT3-R stepped up to win the Daytona race and Keating and Bleekemolen want to do the same thing in the Monterey Grand Prix. A victory on Sunday would go a long way in getting their 2015 championship bid back on track.
“For the championship it is crucial to bring home good points,” Bleekemolen said. “We haven't scored that well so far due to bad luck so we have to start closing the gap to the leaders.”

Some IMSA rules adjustments since the last race at Sebring will literally make the No. 33 team’s mission a heavier task. Dodge Vipers now have to carry an extra 30 kilos, raising the GT3-Rs minimum weight to 1405 kilograms. That’s about 66 additional lbs. for an increased minimum weight of nearly 3,100 lbs.
“To win a championship you need consistency,” Keating said. “We don't need to win every race, but we need to finish towards the front. We got some hefty weight added to our car for Laguna, but we hope that we are still able to run within the top five. The goal is the championship, so we need to be careful and do well.”

The competitive pace and meticulous preparation both Riley Motorsports-prepared Vipers have demonstrated this year could help close the gap on any performance disparities in Monterey.

“As a team, with the car and our preparations, I feel we are much better prepared than last year,” Bleekemolen said. “We are really able to maximize our performance. It will be hard to see if we can do a better job than last year as the BoP is very different. You only know where you stand after you really see how the car behaves with the new weight and configuration. This is the same for everyone though, and we will give it all, as always.”

Keating credits non-stop development of the second-year Viper GT3-R program as another factor in the team’s success and performance.

“We are really talking about two totally different programs from last year to this year,” Keating said. “The level of development that we have done to be able to dial in our car is incredible. ViperExchange.com and Riley have worked hard all off-season to make sure we have the most competitive car possible. Our efforts have earned us some additional weight but we hope to be able to continue incredible engineering and great driving.”

Another advantage this weekend will be having the No. 93 race alongside the No. 33 for the third time in as many 2015 races. The Daytona winner was scheduled to compete only in the four-event Tequila Patrón North American Endurance Cup (NAEC) this year, with the backing of new team technical partner TI Automotive, but the No. 93 is being pressed into service this weekend for co-drivers Jeff Mosing and Marc Miller.

Miller was recently named as the third driver, joining Keating and Bleekemolen, for ViperExchange.com’s effort in the 83rd running of the 24 Hours of Le Mans, June 13 – 14. The trio will race the Riley Motorsports-prepared No. 53 Dodge Viper GTS-R in the GTE-Am class. This weekend’s race will give Miller a chance to get familiar with a Viper race car, the Riley Motorsports team and his two Le Mans co-drivers.

“This is mostly about Marc getting additional seat time in the Viper, but we could be surprised.” Keating said. “It will be an opportunity for the team to gel and get to know each other better. I am also excited for Jeff. It will be good to have another car guy on the team.”

Mosing is the principal of Mosing Motorcars and was instrumental in providing this opportunity for Miller, his longtime friend and teammate.

Noteworthy
- Like many other drivers, Laguna Seca is a favorite of Bleekemolen’s and a track on which he has seen some success. “I won my first ALMS race at Laguna Seca back in 2010,” Bleekemolen said. “I've been on the podium many times there and won a few races, so I have great memories from there. Laguna Seca has been nice to me, and it is one of the most beautiful race tracks in the world, that's for sure.”

- Keating, who has co-driven to victories in three of the last eight GTD races dating back to last season, is still looking for some of that same magic at Laguna Seca. “For some reason, I have never loved Laguna Seca,” Keating said. “I hope to change that this weekend. I love Monterey, I love that area of California, but the track as always been a little difficult for me. I am excited to be going back there again with the improvements we've made. I also know that I am a better driver and I expect to do well, which always improves my opinion of a track.” 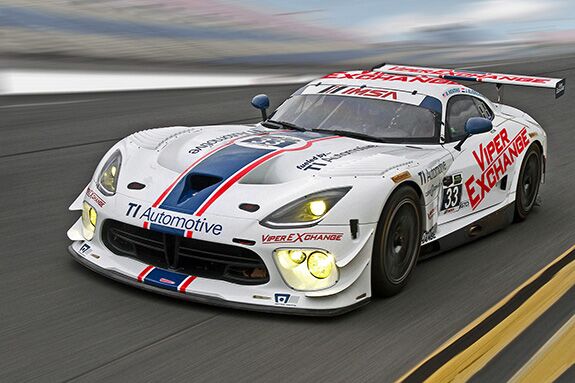