AUSTIN, Texas (September 21, 2014) - Competing in their home event at the famed Circuit of The Americas in Austin (COTA), Texas, ViperExchange.com drivers Ben Keating and Jeroen Bleekemolen drove the No. 33 SRT Viper GT3-R to an impressive victory in the Lone Star Le Mans, the penultimate round of the IMSA TUDOR United SportsCar Championship on Saturday.

“It was a really great team effort all day,” said Keating, principal of the Texas-based ViperExchange.com. “We kept the car clean, improved the car, Jeroen drove a great race, and it just really couldn’t have been any sweeter.”

Knowing that patience would be a critical element in the race, Keating put in an incredibly calculated race-opening driving stint, doing his best to maintain a pace at the front but understanding that keeping the car in one piece was of primary importance. Keating raced in the top five for much of his run, pulling in to the pits during a timely yellow at the one-hour mark.

“In qualifying we had a very significant understeer, and we overcorrected for the race and developed a pretty significant oversteer,” Keating said. “This track is not one where you want an oversteer. I was able to hold the other guys behind me until traffic started coming around. The traffic opened the door for them to get by. My stint in the car was a challenge. I started in second and brought the car home in seventh.”

Keating handed off to Bleekemolen and the job was clear for the experienced veteran. Knowing that the team didn’t have the fastest car but one capable of winning, the Dutchman went to immediate work, passing multiple cars during his opening stint and climbing up to fourth by time the race had one hour remaining.

Pitting for the final time, an impressive job by the No. 33 ViperExchange.comcrew would elevate Bleekemolen to second, with the car steadily gaining on the leading BMW as the laps continued. With 30 minutes remaining, the slowing BMW was simply no match for the Viper, and Bleekemolen would cruise to the lead and never look back.

“Today was great, it was very exciting,” Bleekemolen said. “When I got in the car we were very close with many cars, five or six were fighting for second, and at that point I didn’t think we had a chance at winning. I just kept it clean, tried not to make mistakes and suddenly we were leading. Some people dropped out because of issues, some lost the pace and some had different pit stop strategies, which allowed me to overtake two or three cars which got us the lead.”

The victory was the second in a row for Keating at COTA and second of the 2014 season after winning in July with Bleekemolen at Canadian Tire Motorsport Park in Canada. In last year’s IMSA race at the Austin track, Keating co-drove to victory in a Porsche in the GTC class. Each Texas race was won in front of a large group of Texas-based family and friends, including Saturday’s crowd of over 100 supporters.

Just two weeks away, the season-ending Petit Le Mans can be seen live in its entirety on IMSA.com and in same-day coverage on FOX Sports 2 beginning at 3 p.m. EDT on Saturday, Oct. 4. Race highlights will air on FOX on Sunday, Oct. 5and viewers can check local listings in their areas for air times. 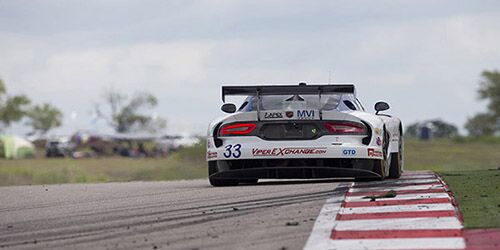