ATLANTA (October 4, 2014)– A competitive and race-leading performance by the Viper Exchange Team ended just past the halfway mark in Saturday’s Petit Le Mans at Road Atlanta after the second of two contact incidents in just over an hour left the No. 33 Viper GT3-R too damaged to continue.

Starting driver Jeroen Bleekemolen rolled off from fourth on the GT Daytona (GTD) class grid and immediately challenged for the lead. He raced to as high as second before turning the No. 33 over to Ben Keating at the race’s one-hour mark.

Keating continued to battle at the front and moved the No. 33 into the lead early in the race’s second hour in what was one of his best driving stints of the 2014 season.

“We started out with a pretty good car, we were able to run up front,” Keating said. “Jeroen did great and handed a great car to me. I was really enjoying my first stint but then I came in because our car was really bad on tires.”

The stop dropped Keating deeper into the top-10 GTD running order and he encountered the first of two on-track contact incidents two hours and two more pit stops later. He was racing through Road Atlanta’s Turn 10 section when he came into contact with a Prototype in the opening minutes of hour four.

I’m not sure what happened in the Turn 10 area,” Keating said. “I feel bad for Jon Fogarty in the Action Express Prototype because I think he got penalized for running into the back of me but it was not his fault. I had shifting problems in Turn 10B and he was expecting me to go, go, go and I was in between gears, so I didn’t have the power behind it. It was unlucky for both of us and ultimately caused the end of both of our days.” While the Action Express entry retired, Keating continued after repairs in a less-than-ideal Viper. 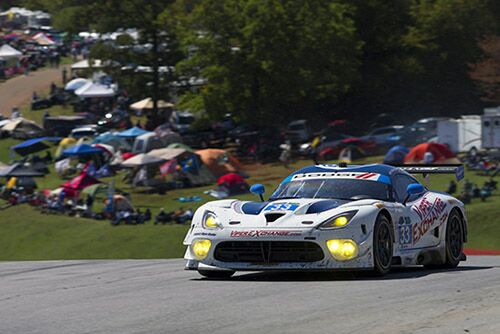 “I went back out without a diffuser and it was really scary,” Keating said. “The diffuser gives a lot of downforce so it was pretty unsafe. The longer I drove the worse I got. I gave Jan Heylen the inside of Turn 7 on a lap, hit the throttle on the rumble strip of the exit and got a little loose. Then Jan squeezed me out, we hit and I didn’t have any way to recover. You normally would turn the wheel to recover from being loose but since he squeezed me out with no track left, I didn’t have any room to recover. We’re not in the championship hunt so we didn’t feel it was super important to go run some more laps. Unfortunately, our day ended early and we just let the guys put it away”

The early exit ended a race that began full of promise and with a legitimate shot at ViperExchange.com taking a third 2014 victory to go along with wins at Canadian Tire Motorsport Park and one race ago at Circuit of The Americas.

“I think we had a shot at it, many had a shot,” Jeroen Bleekemolen said. “At the start the car felt pretty good. We were running as planned, everything was going great. It’s unfortunate to have our day ended before I got another stint in the car to fight for the last couple of hours for the win.”

The retirement also prevented ViperExchange.com’s third driver, Sebastiaan Bleekemolen, from getting a chance to race the No. 33 for the second-consecutive race. Both he and his younger brother, Jeroen, didn’t get to race at Sebring this past March when a fire early in the race sidelined the No. 33, the last time the elder Bleekemolen competed with ViperExchange.com.

“For me, today didn't even start,” Sebastiaan Bleekemolen said. “I didn’t drive the car yet. It’s a shame because I think we had a shot at it. Ben did a really great job. We had an issue in Ben’s second stint, and I think we could have come back from it, but the second hit was hard. I raced at Sebring when they caught fire and at Daytona when we had technical issues because it was the first race with this car. So I really want to come back with these guys and win one of the long races.”

The 2014 season in total was largely positive from Jeroen Bleekemolen’s point of view. “We’ve been doing really well,” Jeroen Bleekemolen said. “A lot of people don’t remember that a year ago the car wasn't even ready yet. We were still waiting to take it on the track for the first time. We won 20% of the races this year so we didn't do that bad, but we hope to win a championship. We had a great car this year, I hope we have an even better car next year so we can race for the championship.”

Keating acknowledged a character-building season. “We had some really high points and some really low points this season,” Keating said. “We won a couple races, which was our strong point, but then we had a couple races with some major problems. We had the fire in Sebring but this is really our first big hit of the year. What we need is consistency, we want to win a championship, it would have been nice to win Petit but I guess it just wasn't in the cards for today.”