DETROIT (May 29, 2014)– Ben Keating and his Viper Exchange racing team will bring the Viper GT3-R back home to Detroit with co-driver Jeroen Bleekemolen for this weekend’s IMSA TUDOR United SportsCar Championship Detroit Grand Prix, May 30 – 31, on Belle Isle.

Saturday’s featured race is the fourth TUDOR Championship GT Daytona (GTD) round of the year and starts at 12:10 p.m. EDT. The 100-minute sprint race, which also includes the Prototype class, can be seen in virtual live coverage – the telecast will begin before the race is over – on FOX Sports 1 at 1:30 p.m. EDT/10:30 a.m. PDT. Live coverage can also be heard on MRN Radio starting at Noon and local Detroit radio network WDFN-AM 1130.

“The Viper will be the only American-made car in the United SportsCar GTD class,” Keating said. “This is a huge deal and a ton of pressure. A podium finish in the city where every Viper is hand built would be a big deal.”

A street race is challenging enough, but the Viper Exchange team comes to Detroit still lacking some overall horsepower to the competition within the current IMSA TUDOR Championship rules structure.

“We are the slowest car on the straights so we will have to make up time in the corners,” Bleekemolen said. “Usually street tracks are low speed, I don't know this track yet, but I still feel this is one of the tracks that could suit our car very well.”

The Viper Exchange team, which is run by Riley Technologies, has worked hard to perfect a setup for the Viper GT3-R that maximizes cornering and handling rather than overall top speed

“Our big V-10 is cut back so much that we are forced to make our car perform under braking and handling,” Keating said. “We are the slowest car in top speed so our Viper shines the best on short courses. Typically, a street course is bumpy and has less grip. The Viper Exchange GT3-R handles both conditions fairly well. It is frustrating for me to say this, but right now the shorter the course the better our car is. We have been forced to develop a race car that gets the job done somewhere other than the straights.”

“It is the first time to Belle Isle for both Jeroen and I,” Keating said. “I have been watching video and studying the track map. It does not seem like a difficult track to learn, which usually means there are some subtle things that make a big difference. It makes it fun to learn a new course and focuses the team's efforts. My only experience with street courses was last year in ALMS. We did Long Beach and Baltimore and it is definitely a different type of racing. It favors the conservative driver.” 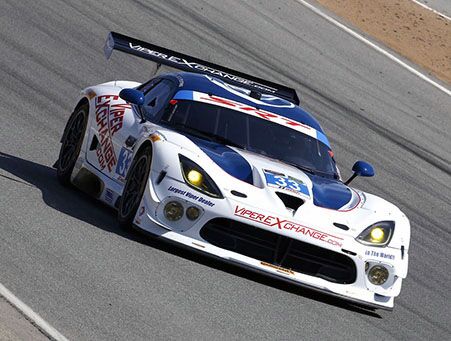 Bleekemolen has also done some online pre-race homework in preparation for Belle Isle.

“I watched some onboard camera footage from previous years on YouTube to know where the track turns left and right,” Bleekemolen said. “I always do that to learn new tracks and on Thursday I will walk the track to see the curbs. There's not much more you can do, but it should be enough.”

After starting the season with the Rolex 24 At Daytona and 12 Hours of Sebring endurance races, Detroit is the second GTD short sprint in a row and the division’s only street-course event of the season. One race ago the GTD class joined the PC division for a two-hour sprint at Laguna Seca.

"I think our chances are good,” Bleekemolen said. “We have a car that works well on bumps, which will help on a street track. I always love racing between the walls. You can't make mistakes which makes it more exciting and challenging.”

-Keating and Bleekemolen are making their Belle Isle debuts but the top Dutch driver has seen some success on other well-known temporary street circuits. “I have won twice in Monaco with the Porsche Supercup and also won street races like Beijing with A1GP and Long Beach with ALMS,” Bleekemolen said. “I love street tracks, so I'm really happy we go to Detroit. I don't know the track yet, but that shouldn't be a problem. Every driver will have to build up to nicely, even if you know the track.”

-Bleekemolen is one of about 20 IMSA TUDOR Championship regulars who will also be racing in the 24 Hours of Le Mans, June 14 – 15, but he will not be taking an overnight flight to France after the Detroit race to participate in Sunday’s Le Mans Pre-Test event. “We're not doing the Le Mans test as all of the drivers are at Detroit,” Bleekemolen said. “So I will fly home to my family on Saturday night.” Bleekemolen will co-drive at Le Mans with former IMSA teammate and fellow GTD competitor Cooper McNeill and experienced American sports car racing driver Bret Curtis, who is competing in the World Challenge class this weekend at Detroit.