DETROIT (May 29, 2015) – Ben Keating moved a worldwide weekend of racing in Detroit and testing in Le Mans off to a strong start Friday with a personal-best qualifying effort in the No. 33 ViperExchange.com Dodge Viper GT3-R for the Sports Car Classic at the Detroit Grand Prix.

Keating qualified second for the 100-minute Sports Car Classic sprint with a top lap time of 1:34.261 (89.751 mph) in the GT Daytona (GTD) class. He and teammate Jeroen Bleekemolen will co-drive the Viper in tomorrow’s Detroit race and then fly straight to Le Mans, France, after the checkered flag to participate in Sunday’s Pre-Test for the 24 Hours of Le Mans, June 13 – 14. 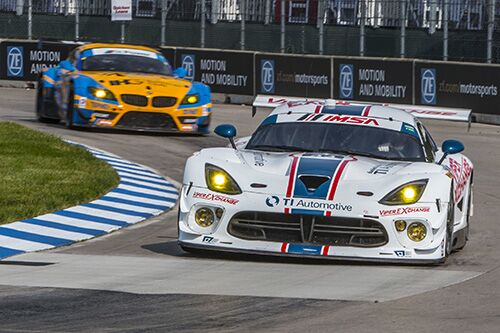 Round four of 10 on the 2015 IMSA TUDOR Championship GTD schedule, the Detroit Sports Car Classic can be seen live on FOX Sports 2 and IMSA.com tomorrow, Saturday, May 30, at 12 p.m. EDT. An immediate encore telecast airs two hours later at 2 p.m. EDT on FOX Sports 1.

“What we remember about this race from last year is that not having top speed really hurt us,” Keating said. “It’s really close-quarters racing, a really hard place to pass and qualifying is very important. We are excited to be on the front row and have a much better car than we did last year, but still one of the slowest cars on top speed.”

Keating will start tomorrow’s race and then hand off to Bleekemolen to bring the Viper to the finish.

“I am really happy with the front-row start,” Bleekemolen said. “Ben did a really nice job in qualifying, very nice laps, and that is a result we can build on. Practice was also quite good, we had both running in the dry and the wet and we both got pretty comfortable. So, if we don’t have bad luck we should be able to have a good result here.”

In addition to being a winning Viper race car driver, Keating is also the principal of ViperExchange.com, the world’s largest Viper retailer.

“You can’t get much more Detroit than the Dodge Viper,” Keating said. “One of the things that really makes it exciting is that not only is the Viper born in Detroit, but the Viper is the only American car in the GT Daytona class. Yes, you have the Corvette racing in GT Le Mans (GTLM), but the only American-made car in GTD is a Detroit child, the Viper, built right here in the Motor City.”

Keating and ViperExchange.com are now taking the Viper back to Le Mans. He and Bleekemolen will fly overnight Saturday to France where they will meet up with their additional Le Mans co-driver, Marc Miller, and the Riley Motorsports team. Sunday’s day-long test will be the first laps ever on Circuit de la Sarthe for Keating and Miller.

“Le Mans is always special,” Bleekemolen said. “You can only drive the track during the test day and the race, so it's great to get out on track and get our race preparations underway. This will be my 10th time doing the race and it's great to do it with Ben and Bill’s team in a Viper. Track time is very important at Le Mans. The lap is long so you can't do many laps at all before the race. So, all three drivers need to get comfortable. The main thing at the test is to build up to it nicely, learn the track and get used to the traffic.”