TI Automotive and ViperExchange.com Bring Daytona-Winning No. 93 and the Returning No. 33 Viper GT3-Rs to the 12 Hours of Sebring

No. 93 Going for Second-Straight 2015 Win with Ben Keating, Al Carter, Marc Goossens and Cameron Lawrence; No. 33 Returns to Sebring with Keating and Jeroen and Sebastiaan Bleekemolen After Spectacular 2014 Fire

The entirety of the Sebring race will air live this Saturday, March 21, on FOX Sports networks and IMSA.com. The opening two hours will be on FOX Sports 1 at 10:30 a.m. EDT before FOX Sports 2 anchors the majority of the coverage from 12:30 p.m. to 7 p.m. EDT. FOX Sports 2 returns again for the finish and post-race coverage at 10 p.m. EDT after three hours of unrestricted live coverage on IMSA.com from 7 – 10 p.m. EDT. Finally, FOX Sports 1 will complete Sebring’s complete television lineup with a two-hour highlight show this Sunday, March 22, at 8 a.m. EDT.

The Daytona-winning No. 93 Viper GT3-R will be driven by Ben Keating, Al Carter, Marc Goossens and Cameron Lawrence. The sister No. 33 entry – completely rebuilt after a devastating fire in the opening hour of last year’s Sebring race – will see brothers Jeroen and Sebastiaan Bleekemolen share the car with Keating, who is pulling double duty in both Vipers for the second-straight race.

The No. 33’s triumphant return to Sebring comes one race after that Viper – GT3-R chassis No. 001 – returned to competition at Daytona for the first time since last year’s fateful blaze. Keating and the Bleekemolens all led at Daytona but it was the No. 93 that emerged as the eventual GT Daytona (GTD) class race winner with Kuno Wittmer and Dominik Farnbacher co-driving to the win with Keating, Carter and Lawrence.

Daytona brings a bunch of momentum to the team, but it also puts a target on our back for all the other teams to shoot at,” said Keating, who escaped uninjured from the burning No. 33 at Sebring last year. “Sebring is a very different type of race than Daytona and I think it suits our car very well. We are excited to try to pull off the Florida sweep.” 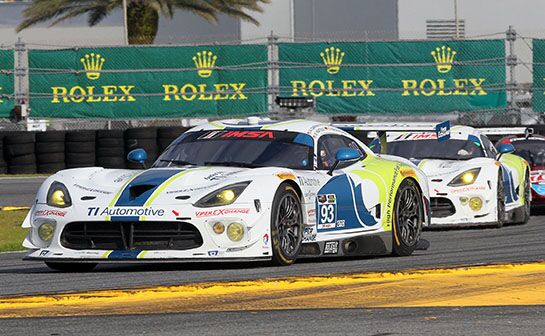 The Daytona victory came in the on-track debut of a new technology and marketing partnership between TI Automotive, ViperExchange.com and Riley Motorsports that continues at Sebring and all season. Both team Viper GT3-Rs – the No. 33 for the full TUDOR Championship and the No. 93 in the four-race Tequila Patrón North American Endurance Cup (NAEC) – are competing for the first time with several TI Automotive high-performance systems, including the fuel pump delivery and driver air conditioning. In both cases, TI Automotive engineers tuned current production Viper components to Riley specifications. The technology transfer has resulted in significant weight savings and optimized engine efficiencies for more power.

“I think the best thing to take from Daytona other than the win is how well the entire team performed flawlessly,” said Lawrence, who came home a winner in his Rolex 24 debut. “We know that we have two strong cars and a strong driver lineup, but we also have the best support and team in the paddock. It also helps having an amazing sponsor like TI Automotive on board for these longer races to push us even harder.”

Like Keating, Carter raced both team Viper GT3-Rs at Daytona but will drive only the No. 93 at Sebring after earning some valuable first-place points for the Daytona victory. Carter – who is contesting only the NAEC this year – joins Lawrence in coming to Sebring leading both the overall IMSA TUDOR GTD championship standings and the NAEC GTD points race. Daytona co-drivers, Wittmer and Farnbacher, also lead in both championships but, unfortunately, are not racing with the team at Sebring due in part to the number of drivers needed for the, compared to Daytona, relatively shorter race and IMSA’s driver rankings system.

“It's hard not to head to Sebring with a little extra bounce in our step coming off our success at Daytona getting our TI Automotive Viper into Gatorade Victory Lane at the Rolex 24,” Carter said. “But this week will start businesses usual and doing what we did at the last race, focus on our consistency, fast driver changes and pit stops and achieving a solid podium finish.” 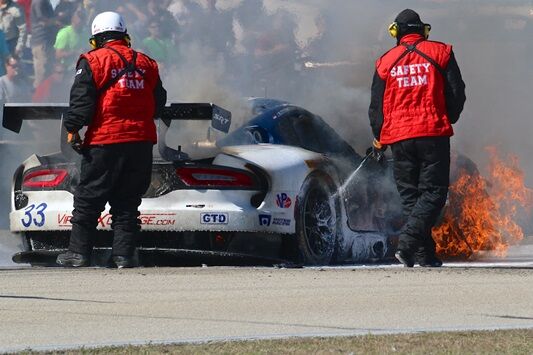 Goossens has shifted to the No. 93 for Sebring after racing in the No. 33 at Daytona. He joined Keating and the Bleekemolens in showing a Rolex 24 pace just a strong as their winning teammates but the No. 33 was knocked from contention with an electrical issue while leading the race early Sunday morning.

“Although the No. 33 had a setback at the Rolex 24, the team proved to be a strong contender with both cars all week at Daytona,” Goossens said. “With a great spirit, and on that winning wave from the 24, we went testing at Sebring for the 12 hour race last month. Although the temperatures might be very different during race week, I think the team is better prepared again. I'm sure you'll see both cars shine again just like the team did last year in winning the GTLM title.”

Goossens, Wittmer and Farnbacher were all drivers in last year’s championship-winning IMSA TUDOR GTLM team. Many of the same Riley Motorsports engineering, technical and crew personnel from that winning effort are now working on the TI Automotive/ViperExchange.com team.

“It is very hard to explain the difference it makes for our team to have the engineering and pit crew from last year's GTLM winning car,” Keating said. “The Viper has always been a really great race car, but the preparation and ability to really dial in the car for each track is amazing. I love it for the GT3-R Viper, because Sebring is a very tough track on cars, and our car has been bulletproof. I really like our reliability and the ease of driving fast in the Viper.”

Keating and Jeroen Bleekemolen will be the lead ViperExchange.com drivers in the No. 33’s full-season campaign for the second year. The duo won races last year at Canadian Tire Motorsport Park in addition to a “home-track” victory for Texas native Keating at Circuit of the Americas (COTA) in Austin. 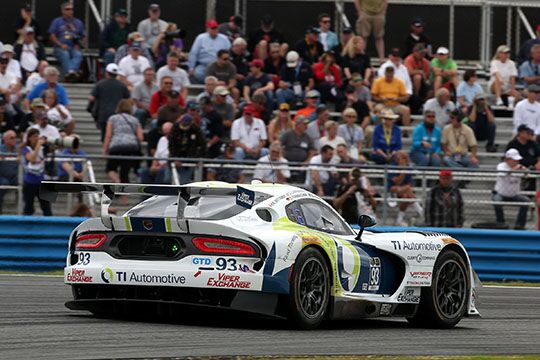 After Daytona I feel even more determined to come back to Sebring to win,” Jeroen Bleekemolen said. “We had such a great run going and should have had a good chance to win. That is part of racing but it does hurt. We were just unlucky, so hopefully luck is on our side this time. I'm ready for it, we need it for the championship and I want a win to make up for our Daytona disappointment.”

“I was really disappointed after Daytona,” Sebastiaan Bleekemolen said. “The car was so good and our driver line-up was really strong. Most of the time of the race we were in the top three. I’m really sure we could have finished on the podium. The only way to forget Daytona is to win Sebring, and we have a car that is car is good under braking and in the corners. That’s what we need at Sebring!”

The 63rd Annual 12 Hours of Sebring Fueled by Fresh From Florida schedule gets underway Thursday with both day and night practice sessions. Friday features final practice before GTD qualifying at 4:20 p.m. EDT. Race-day Saturday starts with a 20-minute warm-up session at 8 a.m. EDT, with the 12-hour race scheduled to go green at 10:40 a.m. EDT. 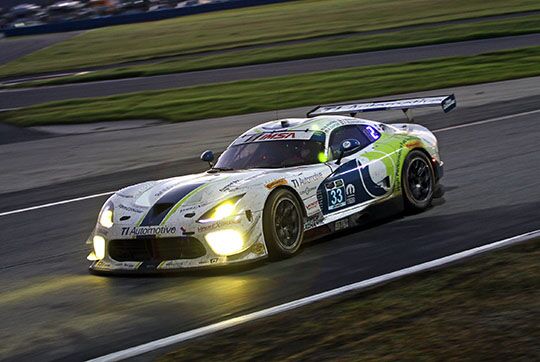 - Viper GT3-R chassis No. 001’s return to Sebring after last year’s fire, and the strong showing in its first race back as the No. 33 at Daytona, doesn’t take away from the stellar record the current No. 93 Viper – GT3-R chassis No. 004 – has amassed since debuting last May at Laguna Seca. Filling in for the remainder of 2014 as the No. 33 as burned chassis No. 001 was being repaired, Keating and Jeroen Bleekemolen drove chassis No. 004 to the victories last year in Canada and Texas. Now carrying No. 93 since Daytona, chassis 004 comes to Sebring with three wins in the last seven IMSA TUDOR Championship GTD races.

- The TI Automotive/ViperExchange.com/Riley Motorsports driver lineup is equally split between Americans and Europeans. Keating (Texas), Carter (Delaware) and Lawrence (Florida) are all from the U.S. while the Bleekemolens are Dutch and Goossens is from Belgium.

- Lawrence, an Orlando, Florida native, has put his local knowledge of one of his “home tracks” to good use. Just last month he drove a Dodge Challenger to his third consecutive Trans Am TA2 class victory at Sebring in the season-opening event for that series. “I have had a lot of luck during my career at Sebring,” Lawrence said. “I’ve been lucky enough to win the last three Trans Am races at Sebring and lead them flag to flag. It is another home race for me, so having support from friends and family makes the race even more enjoyable.”

- The Bleekemolens have also won at Sebring, both in the all-Porsche GT Challenge (GTC) class of the IMSA American Le Mans Series (ALMS), which has essentially been folded into the TUDOR Championship GTD division. “I won Sebring in 2013 in GTC, which was a great race,” Jeroen Bleekemolen said. “I did the last three and a half hours of the race all under green, coming from nearly one lap behind to win. I pushed as hard as I could and the reward to win this big race was great.” Sebastiaan Bleekemolen earned his GTC victory in 2011.