ViperExchange.com Leads in Competitive 24 Hours of Le Mans Debut Only to End up Just Short of Finish

Le MANS, France (June 14, 2015) – A lap-record pace and race-leading performance put the No. 53 ViperExchange.com/ Riley Motorsports Dodge Viper GTS-R, and drivers Ben Keating, Jeroen Bleekemolen and Marc Miller, in contention for the GTE-Am class win at this weekend’s 24 Hours of Le Mans only to have mechanical issues ultimately sideline the team late in the race’s 23rd hour.

Although the team came up just short on finishing the race, ViperExchange.com will leave France proud of more than one accomplishment. In addition to leading and setting the fastest race lap in class – a blistering 3:55.896 time by Bleekemolen – the team was competitive from the drop of the green flag.

“It was very exciting to lead a few laps early on and really show how competitive we were,” Keating said. “We came to Le Mans with the goal of wanting to do well, not only to show what we can do as a team, but also to represent Viper and everyone in what we call the Viper Nation. Hopefully our performance today made them all proud. I know I am very proud of our Viper Exchange and Riley Motorsports team and what we accomplished. We just wanted a little more there at the end.”

Starting driver Bleekemolen rolled off from the second row of the grid after qualifying fourth in the No. 53 on Thursday. He maintained a steady pace through his race-opening triple stint, eventually stepping up to the lead for the majority of the race’s third hour.

“It was a great week, first of all,” Bleekemolen said. “Le Mans is always special, we experienced it all again, some of us for the first time, and we had a lot of fun. We showed something as well, we showed we could have had a good result, which I think is also important. We all showed competitive lap times and know that if things had gone our way we could have had a podium." 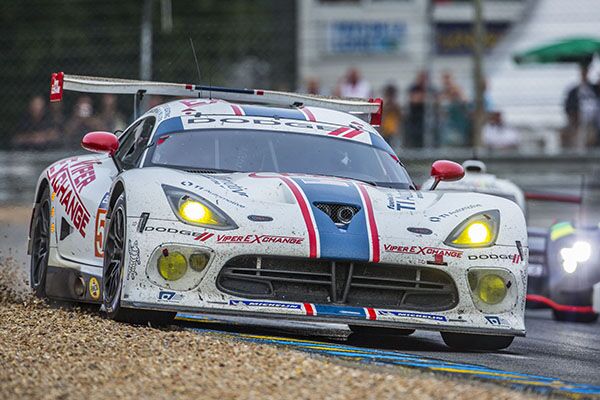 Bleekemolen handed off to Keating who stepped up for his own triple-stint in what was his first-ever driving shift in the actual Le Mans race. He ran as high as second and no lower than fourth, the position he was in when he came to the pits to give the Viper to Miller.

“I was very happy with how competitive I was able to run in the Viper,” Keating said. “I did three stints in a row, everything was going very, well but on my in lap I went a little wide and into a gravel trap. I was able to drive through it but some debris must have cut the alternator belt and we lost a couple of laps making the repairs.”

Miller, who was also making his Le Mans race debut, drove one lap around Circuit de la Sarthe after getting strapped in but was immediately called back to the pits. He stayed in the Viper as the Riley team quickly made the belt repairs in just over six minutes, losing only two laps to the leader.

As the race drifted into the overnight hours, the Viper and its drivers seemed to be hitting their stride. Although it is nearly impossible to get laps back on a track as large as Circuit de la Sarthe, the team was in fifth place and zeroing in on the top three.

“I really came into my own during my night stint,” Miller said. “I actually enjoy night driving, and it showed this year as I got comfortable in the car. I felt that I was in a good consistent rhythm and it turned out it was quite quick as well.”

As night turned into day this morning, however, the Viper team’s fortunes turned as well. Not long after he turned the fast race lap, Bleekemolen detected the gearbox issue beginning to start. The team quickly replaced the internal gearbox cluster.

“We had good speed,” Bleekemolen said. “We were leading the race and posted the fastest lap, so I will go home with good feelings but, unfortunately, not a trophy. The gearbox just wouldn't shift anymore. There was some stuff in the gearbox, metal from the previous one, and it just wouldn’t work any longer.”

"We had a tough race,” said Riley Motorsports Team Director, Bill Riley “We came here to run up front and we ran up front for a little bit but then it just didn't work out. We had a problem with an alternator drive belt, and that put us a little bit back, and then near the end we just had a gearbox failure. So, it's just kind of a shame because there was a lot of hard effort that went into it. Everybody pulled quite hard, and all in the right direction, so it's a shame it didn't all work out. Although I am pretty upset about the result, I am extremely happy about everybody that was involved in the effort.” 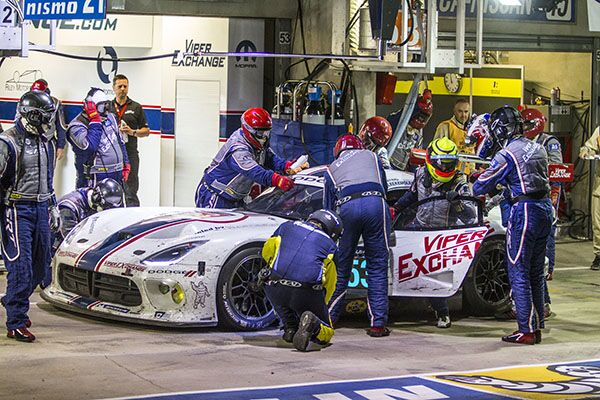 Many on the team, including Keating and Miller, enjoyed their first participation at Le Mans.

“Competing at Le Mans should be any race driver's priority,” Miller said. “This event encompasses the essential root of motorsports, not just sports car racing, but everything an "event" should be. Win or lose, our team put everything we have into this race, and that effort alone is remarkable to be part of.”

All three drivers were racing a Viper GTS-R for the first time, but Keating and Bleekemolen have solid winning experience in other top-tier Viper race cars. The teammates currently race a ViperExchange.com/ Riley Motorsports Viper GT3-R in the U.S. based IMSA TUDOR United SportsCar Championship, scoring a pair of victories in that series’ GT Daytona (GTD) class in 2014. Keating was also a co-driver in this year’s season-opening GTD-winning Viper at the Rolex 24 At Daytona.