ViperExchange.com Backs Up Breakout Victory with Third-Place in Brickyard Grand Prix in No. 33 Viper GT3-R

The podium showing at Indy followed ViperExchange.com’s breakout victory one race earlier at “Mosport” Canadian Tire Motorsport Park. Both finishes are season-best results for the first-year Viper GT3-R IMSA TUDOR Championship effort and have combined to turn the tide on a tough run of bad luck in the first half of the season.

Like the Mosport victory, where Bleekemolen made the winning pass less than two laps from the finish, Indy featured another late-race pass with two laps remaining by the fast Dutchman.

“Jeroen drove an incredible race,” Keating said. “There is no one I would rather have as a teammate. To hand him the car in 10th and finish on the podium again is phenomenal. I’m really happy.”

The fact that the ViperExchange.com team had to fight from far back in the field at all was the result of a costly bump-and-run incident Keating sustained during his race-opening shift. He was running in fifth and in the GTD lead pack when another class competitor spun him out.

“The 58 Porsche was right behind me,” Keating said. “Three separate times he bumped me and let me know he was there. In Turn 12 again he hit me pretty hard and spun me. It took me a while to get turned back around. That was after a caution, and since everyone was bunched up, I wound up in 10th, which really upset me. Race control decided not to give the 58 a penalty which upset me even more. 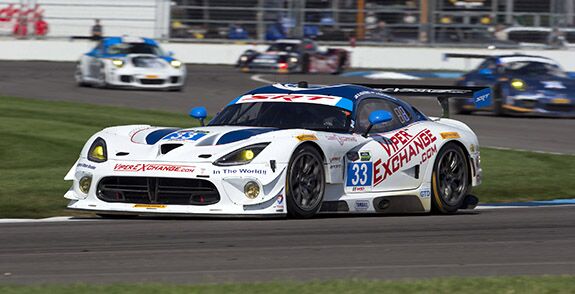 Undeterred by the set-back, Keating turned the car over to Bleekemolen about 60 minutes into the 2-3/4-hour race and the climb through the field began. Driving a double stint to the finish, Bleekemolen cracked the top five with 15 minutes remaining and took fourth a lap later. The pass for the podium came on the final lap of the race on the No. 555 Ferrari.

“I’m pretty happy,” Bleekemolen said. “Ben got spun around, which threw us to the back, but we had great strategy and some good fights to get back to the front. I’m really happy we could take the podium in the last minute of the race. It is great to have come out on top.”

Keating staged a charge of his own after recovering from the spin despite dealing with traffic and some traction challenges.

“I was running decent times,” Keating said. “I had one lap where I was full of red mist that I did one really fast pass. Our car had less overall grip than practice, so I had trouble being consistent, but I think our car was really good on tires. At the end, some cars where locking up and going wide while we were still able to run fast laps.”

Next up for ViperExchange.com and the IMSA TUDOR Championship is the Continental Tire Road Race Showcase at Road America in Elkhart Lake, Wisconsin, August 8 – 10. The weekend’s featured race can be seen in same-day coverage on FOX Sports 1, Sunday, August 10, at 6:30 p.m. EDT/3:30 p.m. PDT.

“The car was great at Indy,” Bleekemolen said. “We had the pace to fight them. We didn’t have much more, but it was just enough to take the podium today. The next track is not our best track but the team has proved that they can do something good, so I’m really confident going into Road America.” 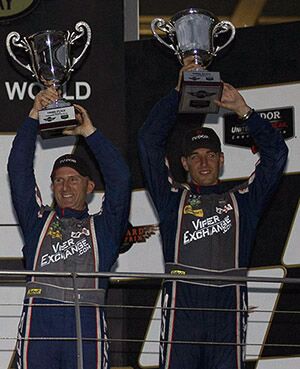