BOWMANVILLE, Ontario, Canada (July 12, 2014) – Jeroen Bleekemolen gave Viper Exchange and co-driver Ben Keating their first pole in the new No. 33 Viper GT3-R in qualifying for tomorrow’s IMSA TUDOR United SportsCar Championship race at Canadian Tire Motorsport Park on Saturday. Bleekemolen posted the fastest time early in qualifying and then came back to seal the pole for good on his sixth of nine laps in the fast, 15-minute session. The pole-winning lap time of 1:19.004 (112.050 mph) topped a strong field of 18 other GTD (GT Daytona) class competitors. Teammate and Viper Exchange principal Keating will start the No. 33 in tomorrow’s 2-3/4 hour race on the Canadian Tire “Mosport” road course. “Jeroen turned just an incredible lap time,” Keating said. “His best theoretical time was 1:18.996, just 8/1000ths off of what he turned. I have never seen a lap that close to perfect. We still don’t have the quickest car, others have better theoretical laps, but our setup has allowed us to be comfortable at the limit and get the possible lap time out of a car that is not the fastest.”

The first-year Viper Exchange team and the Viper GT3-R have been competitive at every race, but a string of typical new-car issues and some uncanny bad luck have prevented a strong race finish. Bleekemolen previously qualified a then season-best second at Detroit but he and Keating are still looking for a race result reflective of the team’s performance.

“It’s great,” Bleekemolen said. “We started this program with a new car. It’s been a good car since the beginning and we’ve just been unlucky with some small issues, but I think we could have had a good result already. It shows we never gave up. The whole team worked very hard for this and hopefully our back luck is gone now. Putting it on pole really means something and it’s just great to be able to do this. The team has worked so hard and the Viper is absolutely fantastic.” 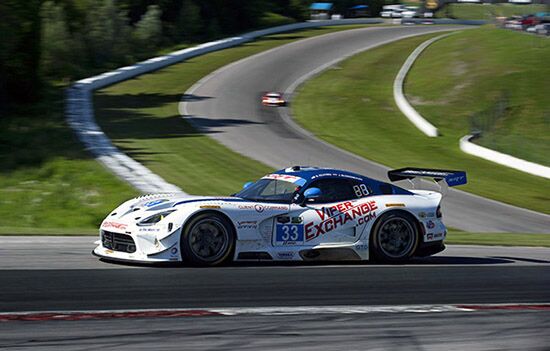 Bleekemolen proved once again he knows the quick way around Canadian Tire Motorsport Park, as he also won the pole in the GT Challenge class for last year’s American Le Mans Series race, which he went on to win. “It was a great achievement for the whole team because it is a new project,” said Bleekemolen, who earned the 16th pole of his career. “It’s a new build for this year. We’ve been a bit unlucky in the races, we’ve shown already we have some speed in other events. Finally we were able to put it on pole.” Keating gave credit to his Riley Technologies team on what was a great day for SRT Motorsports Vipers at Mosport. Kuno Wittmer also won the GTLM class pole in the No. 93 Dodge Viper SRT GTS-R. “We really nailed the setup,” Keating said. “We pulled out all kinds of tricks to get the pole and Jeroen put in that just amazing lap. We should have a great car tomorrow and I am hoping it stays dry because so many others are looking for rain. I am really comfortable at this track and learned a ton last year and in GT3 Cup. This could be our race. We are due.”