TI Automotive will serve as the primary sponsor on the No. 33 and a debuting No. 93 Dodge Viper GT3-R GTD entry in the four long-distance NAEC races at Daytona, Sebring, Watkins Glen, and Road Atlanta. For the remaining six GTD rounds of the TUDOR Championship, TI Automotive will remain as an associate sponsor on the No. 33 ViperExchange.com that will see Keating and Bleekemolen pair up as co-drivers for a second-consecutive season. Both Vipers will be entered and maintained by championship-winning team and constructor Riley Technologies.

“This is a great opportunity for TI Automotive to bring its award-winning street technology to the track and to partner on a team with the award-winning combination of drivers, race-car design and development crew of Riley Technologies and Viper Exchange,” said Al Deane, chief technology officer, TI Automotive. “We had a one-time chance to work with this team in July of 2014 at the TUDOR race in Indy, and we met some very talented people that are experts at tuning performance and efficiency from the street to the track. This sponsorship and endurance series gives our company and motorsport enthusiasts an iconic American sports car brand at all iconic American race tracks.”

“2014 was the first season for chassis number one of a brand new car with the Viper GT3-R,” Keating said. “I think we have one of the best teams in the paddock, which always has a lot to do with consistent performance. We have learned a lot that we hope to put to good use in 2015, but the big news for us is our relationship with TI Automotive this year. What really makes this partnership unique is that it is not just about marketing but also a really valuable technical partnership. TI Automotive is the best in the business for fluid systems.”

At the SEMA high-performance aftermarket show held in November, TI Automotive announced a technical collaboration with Riley Technologies and Viper Exchange to provide optimized fluid systems for the Dodge Viper GT3-R race cars. TI Automotive has been supporting several test sessions to further tune operating performance and efficiency on both cars for the season-opening Rolex 24 At Daytona. 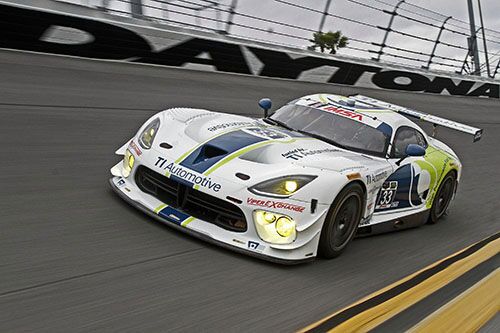 Both the No. 33 and No. 93 Viper GT3-Rs feature an all-new look for 2015, with a white body, featuring a bold blue stripe outlined in bright green, from nose to tail. The TI Automotive icon and Fluid thinking™ taglines sit atop the roof and prominently on the side profiles.

Keating is traveling out of the country this weekend and, along with Jeroen Bleekemolen who is competing in the 24 Hours of Dubai, will not participate in the Roar Before the Rolex 24. The duo was, however, part of a productive two-car test at Daytona International Speedway in November.

Roar driver assignments have Carter, Goossens and Sebastiaan Bleekemolen in the No. 33. Carter is also listed on the No. 93 that he will share with Lawrence, Farnbacher, Goossens and Wittmer. Final driver lineups for the Rolex 24 will be determined after this weekend’s three-day test.

Jeroen Bleekemolen - “In our first season we could show our strength and won two races. A great effort by the whole team with a new car. Everyone has worked really hard to improve so I feel we are well prepared for our second season. I'm very optimistic. The goal has to be the championship. We don't underestimate the competition, as I know how tough it will be, but at the same time I know our team has worked really hard and is ready to go out and win. With the things we learned in our first year we should be strong. I'm really happy to be back for another year.”

Sebastiaan Bleekemolen - “I did three races last year in the GT3-R. I raced in the first two at Daytona and Sebring and the last race of the season. When I drove the car at Petit, it felt much more comfortable than in the beginning. The team and drivers worked hard during last season to improve the car and I think they succeeded. I’m really optimistic about Daytona, although the competition will be strong, maybe stronger than last year. I think all the teams learned a lot last year, but I’m sure we can have a good result at Daytona if we keep the car clean. We have an experienced driver lineup with the same goal: take the win and work together to establish that!”

Al Carter - “The Riley Motorsports name and team is legendary in the sport but I couldn't help but be drawn to the fact, that even after all of their past success, they continue to work hard to improve like 2015 is their most important season ever. I was lucky enough to have Ben toss me the keys and take out his Viper for a couple laps at their November test. I was very impressed with how immediately comfortable I was in the car. Even when trying to be respectful of being in a testing situation, I couldn't help myself and be on race pace on my second lap.” 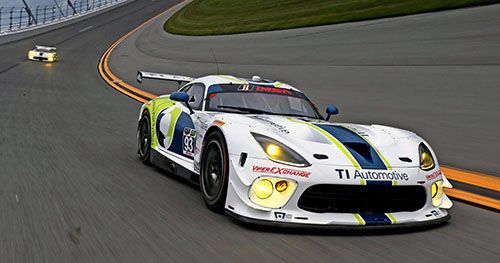 Marc Goossens- “First of all, I would like to thank Ben Keating and the people at TI Automotive for putting this program together and keeping the Viper name on the track. It's good to see the majority of the crew back as well. It's great to be back here with the Riley Motorsports guys. Personally, I'm really excited to be sporting the TI Automotive colors again. We started our relationship at Indy last year where we were a little unfortunate with the TI Automotive-branded 91 car, but at the same time they had a little bit of that winning taste as our sister car won at the Brickyard. I look forward to giving them some trophies.”

Cameron Lawrence – “I am just really excited to have the chance to drive with such a good group with Ben Keating, Bill Riley and everybody on the team. After having such a good season last year, and now getting in the Viper, it is just a real cool opportunity to get to drive and do my first Rolex 24 with them and a few other races. It’s definitely exciting for me. The Viper is amazing and really easy to drive. The brakes are probably the high point on the car but the handling in general is really good and you can tell that they worked a lot last season on the balance and all of the development. We did a whole fuel stint for about an hour in my first test and it barely felt like 30 minutes. Over the course of a whole race it should be a really good car.”

Kuno Wittmer - “It certainly feels right that our team is reunited. Since 2012, we have had the chance to work together on winning a championship and through some heavy and time consuming on and off track development, we did just that. Now, to take on a different program, with our key players still in place, it simply makes sense. The combination of Viper Exchange with TI Automotive and Riley Motorsports sets a world-class standard. The Viper fans have always been, in my mind, the most loyal car-type fans. To give them a victory and a great show at Daytona for 24 hours, I believe they will be impressed and very happy by Sunday night. The TI Automotive crew are extremely nice people. Their product and company structure is an example a model that many should look up to. Nothing makes me more proud than to be able to run alongside true professionals at TI Automotive. They just get it.” 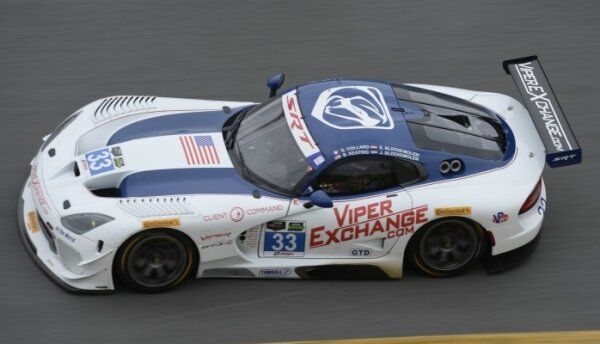 Right after winning the 2014 United SportsCar Championship GT title, Dodge announced the end of the factory Viper racing program and while those championship teams are still out of commission, there will be at least one Dodge Viper race car participating in the upcoming Rolex 24 at Daytona International Speedway.The Dodge Viper GTS-R teams had a great season in 2014, with a streak of podium wins putting the #93 team taking home the championship in the GT class. Unbelievably, the celebration by Mopar racing fans was cut short as the Chrysler Group quickly announced that they would be discontinuing the factory backed endurance racing program. Just a few days after the Dodge Viper race program had reached the pinnacle – the program was dead. This came as a hard hit to Mopar and Dodge racing fans who have been forced to endure the passing of the NASCAR program and the off-road truck racing program – both of which were also killed off immediately following championship seasons. The Viper program had so much promise, but when the Chrysler Group saw an opportunity to lower the price of the consumer-grade Viper simply by discontinuing a racing program, they said goodbye to the endurance racing program in a big hurry. Fortunately, the privately owned race team of Ben Keating's Viper Exchange will give Dodge racing fans someone to cheer for in the world of endurance racing. Rumors of a Privateer GT Viper are Dead Over the past few months, there were rumors that privateer race teams (non-factory backed) would buy up the Dodge Viper race cars from the championship campaign and go racing in the 2015 IMSA Tudor series, but a report from Motorsport.com says that it isn’t going to happen. The championship winning cars are still technically owned by the Chrysler Group and they are still sitting at the North Carolina shop of Riley Technologies, who builds all of the modern Viper endurance racers.

While the factory GTLM program may have come to an end, the Dodge Viper will still be represented in the TUDOR United SportsCar Championship next year, albeit as a privateer effort in the GT Daytona class. At least one, but probably two, Dodge Viper GT3-R is expected for the entire season, with Riley Motorsports coming off a productive test this week at Daytona International Speedway in preparation for January’s season-opening Rolex 24 at Daytona. A total of three Viper GT3-Rs turned laps on the Florida high banks, including two ViperExchange.com-backed entries in GTD spec and a FIA GT3 Viper running in Pirelli World Challenge trim. “To get back running again is always good,” Bill Riley told Sportscar365. “We had the car that was from Sebring back together again [after the fire]. As far as that goes mechanically, it was a good test. “We ran a lot of miles. The weather didn’t cooperate as much as it should have but all in all it was a pretty good test.” Ben Keating and Jeroen Bleekemolen, who are expected to return to the No. 33 Viper next year, were joined at the test by ex-factory drivers Marc Goossens and Kuno Wittmer, as well many of the mechanics and engineers from the now-defunct factory GTLM effort. Riley said it remains to be seen whether a potential second car could be added into the mix, either for the entire season or Tequila Patron North American Endurance Cup rounds only. “Obviously we haven’t made our full announcement yet but we’re working hard on getting everything sorted out for next year,” he said. “On the drivers’ side, obviously the factory guys we had last year would be my first calls [to fill additional seats]. We’re pretty excited about moving forward with the GTD cars.” Out of the four full-season factory drivers, only Jonathan Bomarito has announced plans for next year, having rejoined SpeedSource’s Mazda operation. Riley expects a formal announcement on the team’s 2015 program to be made around mid-December. 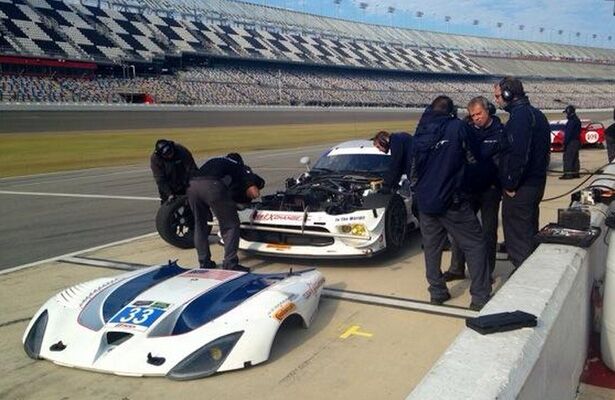