DAYTONA BEACH, Fla. (January 22, 2015) – One TI Automotive/ViperExchange.com Dodge Viper GT3-R narrowly missed winning the pole while the other narrowly avoided disaster after spinning at 180 mph through the Daytona International Speedway Tri-Oval Thursday in qualifying for the Rolex 24 At Daytona.

Returning team driver Jeroen Bleekemolen, who co-drove to a pair of IMSA TUDOR Championship GT Daytona (GTD) race wins last year with Ben Keating, qualified the No. 33 TI Automotive/ViperExchange.com Viper. He posted the session’s fastest lap early in the run with a top time 1:47.424 (119.303 mph) only to be just edged for the pole with only seconds left on the clock by an Aston Martin.

“The car is really good,” Bleekemolen said. “It was a bit of a messy session with a red flag in there. You never know when someone is going to pull a surprise, which the Aston did, but we are right there. The pace is good, it was a clean lap. In the end, it’s not so important in a 24-hour race but we would still have loved to be on pole, but the car is really good. I don’t think I have ever had such a strong feeling before this race so we should be right there.”

The session-stopping red flag was waved when Bleekemolen’s teammate, Kuno Wittmer, spun in the Daytona Tri-Oval just after completing a lap in the sister No. 93 TI Automotive/ViperExchange.com Viper GT3-R. The Viper lost its right rear wheel and went into a backwards spin that blew the windshield out, but Wittmer masterfully avoided any contact and even got the Viper pointed in the right direction before coming to a stop in the Turn 1 runoff area.

“We were on our third or fourth lap and the car just started to act up a little bit over the start/finish line,” Wittmer said. “I managed to finish that lap and then everything happened so quickly. You can’t even count to two seconds and all of a sudden you’re backwards at 180-plus mph. The wheel came off and we spun right away, that was an indication something was loose in the back, and as I crossed the line I thought I had a puncture or a broken suspension or something. Pretty scary moment but I am pretty happy I was in a car as strong as the TI Automotive/ViperExchange Viper.”

The TI Automotive/ViperExchange.com Riley Motorsports team quickly went to work on the No. 93 and managed to have the repaired Viper on track with more than hour remaining in Thursday’s night practice session.

“We had a wheel come off, which is kind of a rare thing for us, we haven’t had one come off yet in this program,” said Bill Riley, Team Director and Chief Engineer. “One of the top mechanics is on this corner, he put it on, put it in four times, it was a good wheel, but sometimes a wheel doesn’t get quite seated. I think that’s what happened, it came unseated and it is just one of those things. It’s a shame, all of the guys are on it and they will get it fixed, but sometimes these things just happen.” 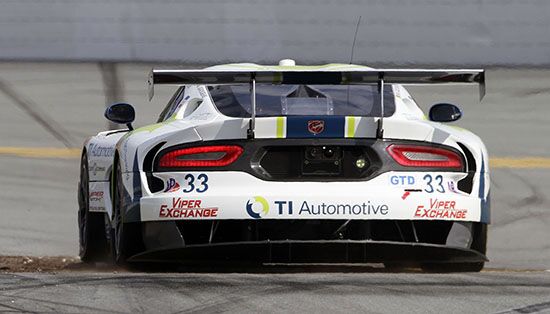 Shaking off the incident, the No. 93 ended up third on the night practice time sheets with Dominik Farnbacher at the wheel for the quick lap. The solid rebound, and the No. 33's outside pole, put a positive end on a good opening-day for TI Automotive/ViperExchange.comat the Rolex 24. The season-opening race of the 2015 IMSA TUDOR United SportsCar Championship season, the Rolex 24 At Daytona can be seen in live coverage on FOX for the first two hours of the day-long race beginning this Saturday, January 24 at 2 p.m. EST. In total, more than 15 hours of live race coverage will be televised on FOX networks this weekend, with the majority airing on FOX Sports 1 and FOX Sports 2. The broadcast schedule includes the final seven hours of the race and post-checkered flag coverage on FOX Sports 1, Sunday, January 25. Friday’s Rolex 24 At Daytona event schedule has a lone final practice session at 11:25 a.m. EST. This will be the last official on-track session before the start of the 53rd Rolex 24 At Daytona at 2:10 p.m. EST this Saturday. Additional Driver Quotes

Ben Keating – "This will be my fifth Rolex 24. If I could only do one race a year, this would be it! There is something electric about Daytona. I love the Ferris Wheel, the fireworks and the campfires. I think there is also something very special about doing a 24-hour race within the Tri-Oval. All the action is captured within a smaller area. If there is something exciting going on, most likely you can find a way to see it. It is a special place to race, but also a special race to experience as a spectator.”

Jeroen Bleekemolen – “I have done racing all over the world and rate the Rolex 24 as one of the best. This is one of the best races in the world and I’m not just saying that, I know! Our TI Automotive and Viper Exchange guests this weekend should try to get as close to the action as they can. Watch a pit stop, understand the strategy, so much work and effort goes into a 24 hour race like this and they should feel like part of the team because without them this wouldn’t be possible!”

Sebastiaan Bleekemolen – “It sounds a bit strange, but entering the track on race day is so nice. When you have arrived in the infield, there is no way back out, you are here and will be for more than 24 hours. You know that it will be a long day and night without much sleep, but you also know that the adrenaline will bring you to the finish.”

Al Carter – “I’ve learned a lot the last couple of years about this 24-hour race. Surprising is how aggressive you have to battle the entire race, and no matter what you and your team are faced with, it’s 100% maximum effort for 24 hours. It may be hard to believe that I’ve had some of my most aggressive battles with other competitors in the wee hours of the morning at Daytona. You're constantly battling with other teams to get laps and not give laps, it doesn’t matter what time the clock says.”

Marc Goossens – “Daytona is a little different as it’s, for most of us, the first endurance race of the year. On top of that, there are drivers from all around the world and all different series competing together. From GT racing in Europe and Asia and NASCAR, IndyCar, even V8 Supercars from Australia, they all want to be here. It all adds to the excitement and the best part of the race in my opinion is the build up to the start. All those drivers from different racing series and different nationalities that are being introduced when the cars line up on the false grid. A lot of events happening for our TI Automotive and Viper Exchange guests to watch.” 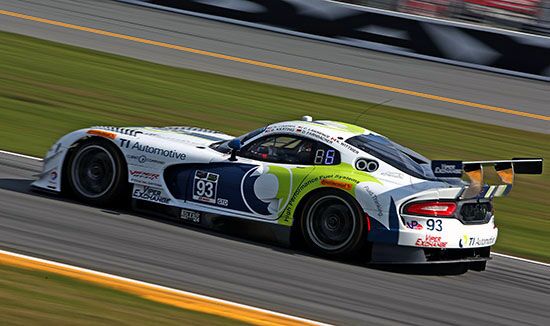