DAYTONA BEACH, Fla. (January 21, 2015) – The TI Automotive/ViperExchange.com Riley Motorsports team confirmed its driver lineup for its pair of Dodge Viper GT3-Rs that will be wheeled by eight different drivers in this weekend’s 53rd Rolex 24 At Daytona.

The season-opening event of the 2015 IMSA TUDOR United SportsCar Championship season, the Rolex 24 At Daytona can be seen in live coverage on FOX for the first two hours of the day-long race beginning this Saturday, January 24, at 2 p.m. EST. In total, more than 15 hours of live race coverage will be televised on FOX networks this weekend, with the majority airing on FOX Sports 1 and FOX Sports 2. The broadcast schedule includes the final seven hours of the race and post-checkered flag coverage on FOX Sports 1, Sunday, January 25.

TI Automotive/ViperExchange.com returns to Daytona International Speedway following a successful Roar Before the Rolex 24 test on the legendary 3.56-mile road course just two weekends ago. Both the No. 33 and No. 93 TI Automotive/ViperExchange.com Dodge Viper GT3-Rs were among the GT Daytona (GTD) class pacesetters at the Roar test and the team is optimistic for a similarly strong showing in this weekend’s race.

Team driver and ViperExchange.com principal Ben Keating and debuting team driver Al Carter have been listed on both the No. 33 and No. 93 Vipers for the Rolex 24. Keating is running the full IMSA TUDOR Championship season with returning teammate Jeroen Bleekemolen in addition to aiming for the 2015Tequila Patrón North American Endurance Cup (NAEC) GTD title.

Keating and Bleekemolen won two races last year in the first GTD season for the Viper GT3-R and ViperExchange.com and even better results are expected in 2015 in the new partnership with TI Automotive. A leading global supplier of automotive fluid systems technology, TI Automotive announced its new partnership with ViperExchange.com in a press conference at Daytona on the Friday of the Roar.

”It is so amazing to be teamed up with a partner like TI Automotive,” Keating said. “They've helped squeeze every ounce of power out of our fuel system, and helped us improve fuel economy and helped improve the efficiency of our air-conditioning system. It is amazing, it truly is much more than a sponsorship, it is a partnership designed to get both ViperExchange.com and TI Automotive into Victory Circle.”

Keating and Carter, who is racing with TI Automotive/ViperExchange.com in the NAEC this year, are listed on both entries for the Rolex 24 to double their chances for a strong start to the four-race NAEC championship, which also includes this year’s endurance races at Sebring, Watkins Glen and Petit Le Mans at Road Atlanta.

“The odds and probabilities of racing show how hard it is for any driver or team to be on the podium after 24 hours,” Carter said. “This particular year, I am honored to be part of this Riley Motorsports team that, combined with the support of TI Automotive and Viper Exchange, has these Vipers prepared to fight those odds and perform. The work that been put in by the crew, combined with the depth of all eight drivers, has us more than ready to go.” 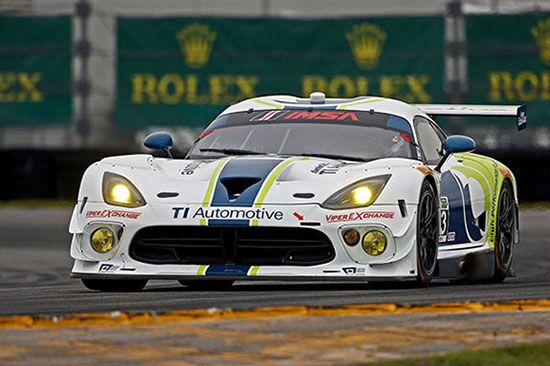 Bleekemolen, his brother Sebastiaan Bleekemolen, and 2014 Rolex 24 GT Le Mans (GTLM) class pole-winner Marc Goossens have also been named to the No. 33 TI Automotive/ViperExchange.com Dodge Viper GT3-R for the Rolex 24.

“The Rolex 24 is one of the most historic 24 hour races in the world,” Jeroen Bleekemolen said. “I have won Le Mans, Nurburgring and the 24 Hours of Dubai but Daytona is still missing. I have finished second by nine seconds once so only a win will really satisfy me!”

Racing brothers from Holland, both Jeroen and Sebastiaan Bleekemolen have early career experience in Vipers in FIA GT competition in addition to last year’s Viper GT3-R debut at the Rolex 24.

“For me, it’s my second Daytona, both in the Viper” Sebastiaan Bleekemolen said. “The atmosphere is great, completely different than any other 24-hour race. I think it’s a special track with extremely high speeds, so you always need to focus a bit extra. And the competition is fantastic. Usually the top three are still in the lead lap after 24 hours of racing!”

After winning the GTLM Rolex 24 pole last year in a Viper, Goossens co-drove to a third-place class finish in the race with Dominik Farnbacher and Ryan Hunter-Reay.

“I'm very happy and excited to not only return in a Viper, but to return behind the wheel of a TI Automotive supported car,” Goossens said. “I had a chance to meet these guys and work with them last year at Indy, and to see the continuous support is awesome. Of course, this combined with the Viper Exchange program together with Riley Motorsports makes it a favorite team for GTD honors at the 24.” 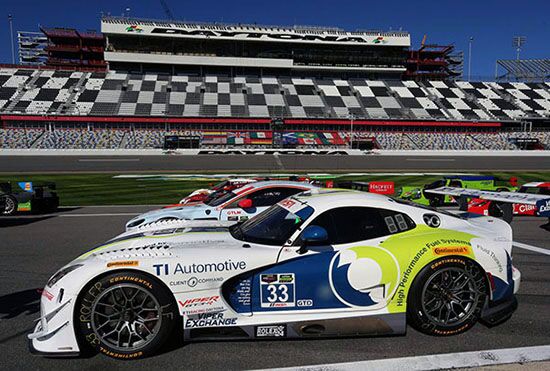 “It's my 10th anniversary at this race,” Farnbacher said. “I won in my debut in 2005 in the GT class with Wolf Henzler, Shawn Price and Pierre Ehret racing with my father’s team. So, since then, I am waiting for my second win. Every year I have had a competitive car and was leading the race at some point but the luck has just been missing. This year I am sure it will work. We have the best team, drivers and support with TI Automotive and Viper Exchange. They are great supporters of our passion and our goals.”

Wittmer returns to Daytona as the reigning GTLM Champion after winning last year’s title in a Viper GTS-R.

“Any 24-hour race is very challenging,” Wittmer said. “As for Daytona, we are looking forward to this weekend with our TI Automotive and Viper Exchange sponsors, we really want a win. For sure, once the sun goes down we have seen in the past that you can have sun in your vision. It does become somewhat distracting. The night can bite also, but it is not as dark as Sebring or Atlanta. The biggest challenge in my opinion is staying on lead lap with zero scratches on the car.”

Lawrence was a regular competitor in the IMSA Continental Tire Street Tuner (ST) class last year and clinched a second-consecutive Trans Am title in a Dodge Challenger on the Daytona road course last November. He will be making his first true endurance race start on Saturday but brings a champion’s experience to the TI Automotive/ViperExchange.com team.

“The longest races I have driven so far have been the Continental races, which are two-and-a-half hours,” Lawrence said. “So, this will be quite a bit different, really a bunch of those races put together, but I am really excited. We have a good group of guys, really good car and a good team. I am going to be anxious and nervous the first time I get in but I am not really anxious and nervous about how the race will go. I am confident in all of my prep work so far and that we have the equipment to win.”

The Rolex 24 At Daytona event schedule begins tomorrow, Thursday, January 22, with opening practice at 9:25 a.m. EST. Two more practice runs, including the only pre-race night session at 6:30 p.m. EST, will be held Thursday along with GTD qualifying at 4 p.m. EDT. A final practice on Friday at 11:25 a.m. EST will be the last official on-track session before the start of the 53rd Rolex 24 At Daytona at 2:10 p.m. EST this Saturday.