DANVILLE, Va. (August 26, 2014)– Ben Keating and the No. 33 viperexchange.com Viper GT3-R team have quickly shifted their focus to next month’s home-state Texas race at Circuit of The Americas (COTA) after a frustrating Oak Tree Grand Prix at Virginia International Raceway on Sunday.

Keating and stand-in co-driver, Tony Ave, overcame issues in both qualifying and the race and the No. 33 crossed the finish line in 13th place when the checkered flag flew in the 2-3/4 hour sprint.

“We made a setup change that was going in the wrong direction for qualifying,” Keating said. “We felt like we missed qualifying by about half a second, which in this class is about 10 starting spots. We started much farther back than we wanted to but I had a good drive. There were a bunch of good guys right in front of me and I had trouble getting by them early, but worked throughout my stint to go from 15th up to fourth place.”

Keating out-paced the majority of the other silver-ranked drivers by the end of his opening driving shift. The race finally seemed to be falling viperexchange.com’s way, but Keating soon encountered the trouble that also struck so many others in the competitive but caution-filled race.

“I was on the back straight, sixth gear, top speed,” Keating said. “We were talking about how low we were on fuel and whether or not we are going to make it. I went into reserve and got so into the fuel conversation I missed my braking point. I wasn’t able to slow it down and keep it on track. When I did get it slowed down, I was in the grass and it is downhill and I was nosed into the tires.”

The incident appeared more severe than it was but valuable time was lost before Keating and the Viper could be pulled from the tire barrier.

“Because I was downhill and on grass, I had the car in reverse and the wheels were just spinning because I couldn’t get any grip,” Keating said. “I was stuck there until the safety crew came and pulled me out. This made us two laps down and the rest is history. Tony drove a great race, everything was good and it was me who screwed it up.”

Ave was filling in for Keating’s regular viperexchange.com co-driver, Jeroen Bleekemolen, who was racing in Slovakia this past weekend in the Blancpain Sprint Series. Ave ran competitive lap times, frequently on the lead pace, in his race-closing stint but could never make any significant position improvements two laps down. 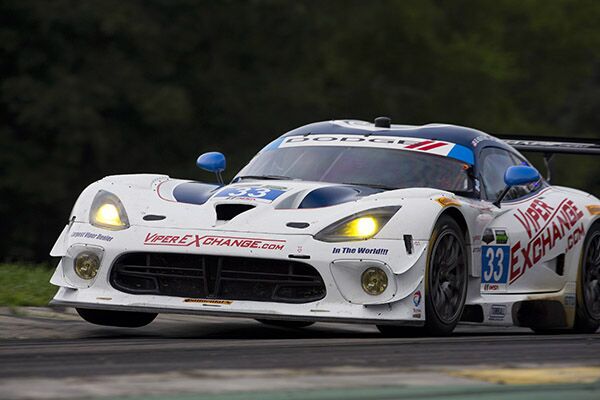 “I think the race today went really well,” Ave said. “The car was set up really well for the race. We learned a lot, we tried a lot of setup throughout the weekend, which I think will put the guys in really great shape for COTA and Road Atlanta.”

Both Keating and viperexchange.com – the world’s largest Viper retailer – are based in Texas in the greater Houston community of Tomball, Texas. The COTA track in Austin is as close to home as any track on the tour. Even better, Keating knows how it feels to win there.

“I’m hoping for home track advantage at COTA,” Keating said. “I won there last year in the American Le Mans Series GTC class and I’m excited about going back there. It’s a place I feel I know pretty well and I am looking forward to racing there again.”

Having a driver of Bleekemolen’s world-class talent back for a race circuit that was built first and foremost for Formula 1 will also be a huge plus.

“I feel really good going into the next race,” Keating said. “Jeroen will be back and I know the track well. It’s the only thing in and near Texas, I have a lot of guests coming in, and I’m just really excited for the event.”

The upcoming COTA event is a Saturday doubleheader with the World Endurance Championship (WEC) on Saturday, September 20. The IMSA TUDOR Championship race is scheduled to start at 11:35 a.m. CDT and can be seen in same-day coverage on FOX Sports 1 at 4 p.m. EDT/1 p.m. PDT.