Ave will be filling in for Keating’s regular viperexchange.com co-driver, Jeroen Bleekemolen, who will be racing in Slovakia this weekend in the Blancpain Sprint Series. The Dutchman currently is second in points in the competitive European championship.

The Keating/Ave pairing brings together an accomplished duo at VIR. Both drivers have won the title of Grassroots Motorsports Magazine Ultimate Track Car Challenge Champion in Riley-built race cars. Keating captured the honor just two months ago in the 2014 edition of the winner-take-all event behind wheel of the same No. 33 Viper GT3-R he drives this weekend. Ave took top honors in 2011 in a Riley Mk XXII track day car.

“Tony is a stud,” Keating said. “Multiple Trans Am Champion, fellow Ultimate Track Car Challenge winner. He has many laps at VIR as well. We should be a great team.”

Keating also returns to VIR as a defending IMSA race winner, having scored the 2013 victory in the former IMSA ALMS GTC class in last year’s Oak Tree Grand Prix. He has also had success at VIR in Viper Cup competition to go along with his multiple championships in that series.

“I love VIR,” Keating said. “I have raced there 12 times and I have won nine of those races. Last year in GTC, I was able to gap the field a little in my stint and I am hoping for the same in 2014. Except for the long straight, the Viper should be good. We are very good up the esses and in Turn 17 coming on to the front straight, but I expect the Porsches, Audis, and Ferraris to be good here also.”

Ave is stepping into a Viper that arrives at one of his favorite tracks after three-straight top-four finishes. The streak began with viperexchange.com team's first victory at Canadian Tire Motorsport Park and also includes third place at Indianapolis and fourth one race ago at Road America. 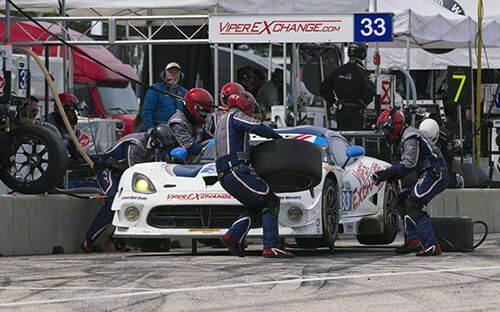 “The VIR track is one of my favorites,” Ave said. “Fortunately, I live within a couple hours of there so we test our Trans Am cars there a fair amount, it’s very challenging and has some high speed esses that I really enjoy. It’s an excellent place to make my debut in GTD.”

viperexchange.com will take to a VIR facility that has received numerous upgrades since last year. Part of the improvements are a paved paddock and newly resurfaced race course.

“The new pavement on the track is a game changer,” Keating said. “It should be really good on tire wear, and some of those cars that are hard on tires should be able to stay more competitive longer. The new pavement makes the track much racier, easier to pass, safer at the limit. I really love what they have done. All good stuff.”

Ave will be making his first IMSA TUDOR United SportsCar Championship GT Daytona (GTD) start with viperexchange.com but he is a regular test driver for the SRT Motorsports Viper program, which is run by Riley Technologies.

“I have driven for Bill and Bob Riley since 1992,” Ave said. “I drove their newly-designed Oldsmobile Pro Series car to its first victories, which led to future championships. I have tested or raced pretty much everything they have built since then, from Trans Am to LMP cars, Daytona Prototypes to Indy cars, Silver Crown to Stock Cars, and now the Vipers. I have done shake down tests and some research and development testing with the GT Vipers, just enough to say that I want to drive them a lot more!”

-Within IMSA TUDOR Championship regulations, the No. 33 will be a little toned down this weekend from the wide-open rules of the Ultimate Track Car Challenge. “The GT3-R will be very different than at the Ultimate Track Car Challenge,” Keating said. “For starters, about 200 horsepower less. I don't know that there will be a big comparison, but at least we know this car is capable of doing some unbelievable laps at this track. I am excited to be going back.”

-Ave’s relationship with the Riley organization extends beyond testing and racing their cars. “I purchased their Trans Am design and business from them a few years ago and continue building those cars today,” Ave said. “I pretty much only drive cars I own anymore, but any time I get a call from the Rileys I am always ready. I can't wait for this weekend!”