Round 8 of 10 races on the IMSA TUDOR United SportsCar Championship GT Daytona (GTD) schedule, the Oak Tree Grand Prix is an all-GT showcase for the GT Le Mans (GTLM) and GTD divisions. The race can be seen live on FOX Sports 1 this Sunday, August 23 at 1 p.m. EDT.

Keating and Bleekemolen are looking forward to the GT-only event, the only race on the 2015 IMSA TUDOR Championship calendar that doesn’t mix the production-based GT machines in with the mostly mid-engine prototype race cars.

“I love this format,” Keating said. “To me, this is what sports car racing is truly all about, this is the root of it, production-based GT cars battling it out.”

Bleekemolen has worldwide experience with all types of sports car racing, including events just for GT and production-based race cars.

“I think the mix is really good to have races with all classes and sometimes just GT,” Bleekemolen said,“This should be a fun event. I missed this race last year, so I'm looking forward to it. With GT only, and a long lap, we don't have too much traffic, so that is also nice.”

A win on Sunday would be the second-in-a-row for the No. 33 after Keating, Bleekemolen and ViperExchange.com scored the break-through victory in the Continental Tire Road Race Showcase at Road America on August 9. The win helped the team forget about a frustrating first half of the season, but the chances for a repeat on Sunday have literally taken a heavy hit in recent days.

The Viper GT3-R, already the heaviest car in the GTD division, was assessed even more weight in the latest “Balance of Performance” rules update issued by IMSA. The Viper now has to carry an additional 10 kg of weight just over an additional 22 lbs. for a required minimum weight of just under 3,120 lbs.; in addition to having the engine saddled with a 200 RPM reduction and a 3 mm smaller air restrictor.

“I am incredibly angry about the changes that are really not based on the data,” Keating said. “I am going to hate running back in mid-pack and being a sitting duck on every straight away.”

The Viper was the only GTD car in the recent rules adjustment to be hit in all three critical areas. 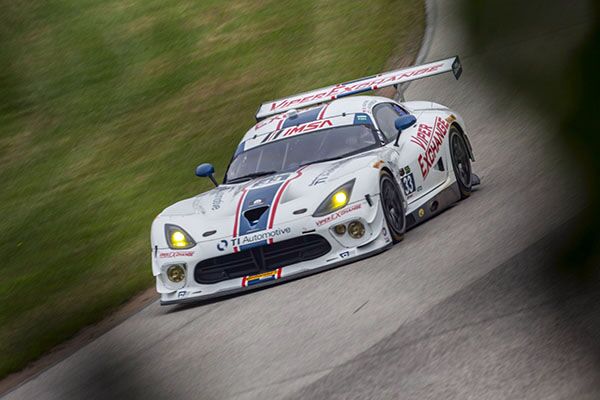 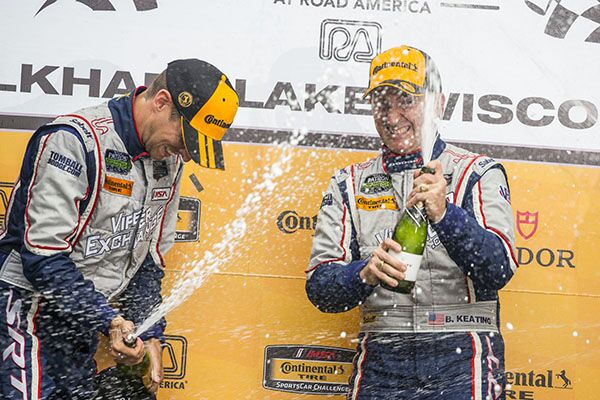 I was a bit shocked, to be honest, when I saw how much we are slowed down,” Bleekemolen said. “Yes, we have had great speed all season and did well in the last two races, but we weren't faster than some other cars, and certainly not dominating. So, to get extra weight, a smaller restrictor and less RPM all at the same time will be hard for us.”

Despite the heavy dose of restrictions, Keating and Bleekemolen know that the Riley Motorsports team will, as always, do everything it can to keep the No. 33 in the hunt for a another victory.

“I have great confidence in the whole team that we can get the maximum out of the situation and hopefully get good points,” Bleekemolen said. “The Riley team always pushes hard to get the best car out there. So, I still hope we can keep our momentum going! We will give it our all as always.”

The 17-turn, 3.27-mile VIR circuit is a favorite of both drivers and the site of many recent victories for Keating.

“I love VIR,” Keating said. “I have always been fast at VIR and just won, with the Riley Motorsports team, the Ultimate Track Car Challenge for the second year in a row in our No. 33 Viper GT3-R. I also won in the GTC class the last ALMS race at VIR in 2013.”

Bleekemolen likes to air it out a little at VIR and hopefully will still be able to in the weightier Viper.

“It’s a super-fast track and you can even get air in one high-speed corner,” Bleekemolen said. “It's spectacular, that's for sure, and definitely in my top five of race tracks. I like this track!”

A three-day event, the IMSA TUDOR Championship schedule begins with a pair of one-hour practice sessions on Friday at 11:45 a.m. and 4 p.m. EDT. Saturday’s schedule includes a final one-hour practice run at 9:55 a.m. before GTD qualifying that afternoon from 4:40 – 4:55 p.m. EDT, which will be streamed live on IMSA.com and the IMSA mobile app. Race-day Sunday begins with a 20-minute warm-up at 8:35 a.m. before the start of the Oak Tree Grand Prix at 1:05 p.m. EDT.

- The Road America victory, and a second-place finish one race earlier at Lime Rock Park, combined to move Keating, Bleekemolen and the No. 33 team off to a strong start in the second half of the 10-race IMSA TUDOR Championship GT Daytona (GTD) season. The Oak Tree Grand Prix is the first of the year’s final three GTD races.

- The recent podium results have moved Keating, Bleekemolen and the No. 33 into the top-five in the IMSA TUDOR Championship GTD standings for the first time this season heading to VIR. Keating, Bleekemolen and the No. 33 have 184 points in both the GTD driver and team standings, 15 points out of first place and within reach of the current fourth-place (189 points) and third-place (190 points) teams and drivers.- Bleekemolen missed last year’s Oak Tree Grand Prix when he was racing in Europe battling for a championship. The last time he raced at VIR in 2013 his current “Boss” beat him. “I have raced at VIR twice and finished second both times,” Bleekemolen said. “At the last race I did there, Ben beat me to the win, so I'm happy I'm in the car with him! If you can't beat them, join them I should say. Ben has been really good at VIR, so we should be a strong team again. Hopefully I can get a win this time around here!”