ELKHART LAKE, Wis. (August 11, 2014)– Steering clear and staying ahead of the on-track trouble that sidelined more than one competitor, Ben Keating and Jeroen Bleekemolen finished fourth in Sunday’s Continental Tire Road Race Showcase at Road America in the No. 33 ViperExchange.com Viper GT3-R.

The finish was the third-straight top-four result for Keating, Bleekemolen and ViperExchange.com, a streak that started with the team’s first win last month at Canadian Tire Motorsport Park and a third one race ago in the Brickyard Grand Prix at Indianapolis Motor Speedway.

Sunday’s Road America race started with another solid opening stint by Keating who raced in second place the entire time.

“We had a good day,” Keating said. “I had a good stint. We qualified third but due to an accident in morning warm-up we started in second. I was happy to sit there in second throughout my stint. It was a good place to be to hand it over to Jeroen.”

Bleekemolen took the wheel just past the race’s one-hour mark but the refueling speed allowed for the Viper GT3-R per IMSA rules extended the stop.

“We were just unlucky in the pit stops,” Bleekemolen said. “By the rules, we are a bit slow in the pit stops with the refueling so that dropped us back twice. Then you have to fight back, which was going pretty well, so in the end I guess it was the maximum we can do if you always go down after pit stops.”

Bleekemolen raced back to second after the first stop only to fall all the way back to ninth when he pitted for the second and final time 55 minutes from the race finish.

“Both of our pit stops were slow in comparison to the other teams,” Keating said. “We got leap frogged in pit lane both times. A couple of the Porsches and the Ferraris had ultra-quick pit stops and gained a couple of positions but Jeroen did a great job. 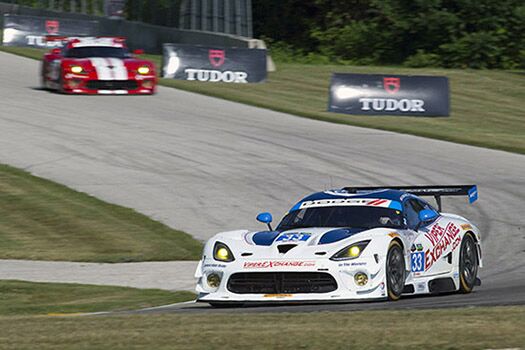 Bleekemolen’s attempt to race through the field in the final stages of the race was thwarted by a pair of full-course caution periods that slowed the field for more than half of the final 45 minutes. The cautions were the final of six on the day that saw the field parade under caution for more than 90 minutes of the timed 2-3/4 hour race.

“This track is a great track but there is a lot of high-risk kind of corners that will bait you into going deep and making a pass that is a low-percentage pass,” Keating said. “So we saw a lot of yellows, we still had a great race, but it was really difficult. It seemed like half the race was under caution, it was honestly just a series of sprint races. It was nice for Jeroen to be bunched up like that, he’s really good in traffic and was able to make a few passes and get us up in the order. We finished fourth, so we’re happy, P4 is definitely not too shabby.”

The entire ViperExchange.com team has been pleased with the recent run of positive but hard-earned results

“We have proven that with a first, a third and a fourth we are consistent in the top five now,” Bleekemolen said. “The car is right up there, the team is right up there, but it is so competitive that if anything goes against you just a little bit you are not there anymore."

Next up for ViperExchange.com and the IMSA TUDOR Championship is the Oak Tree Grand Prix at Virginia International Raceway, August 22 – 24. The weekend’s featured race can be seen in live coverage on FOX Sports 1, Sunday, August 24, at 4 p.m. EDT/1 p.m. PDT.

-After a challenging start to the season that included a devastating fire in the opening hour of the 12 Hours of Sebring, ViperExchange.com is hitting its competitive stride this summer. The recent performance bodes well for the future. “The last two months have been good for us,” Keating said. “We’re ready to bring on 2015. The year started so bad for us with the fire, so sadly we’re not really in the championship hunt. We’re trying to do everything we can to get better and better for 2015. We’re really trying to work on pit stops. If you multiply one or two seconds by 24 hours it’s a lot of time. We’re preparing for next year.” 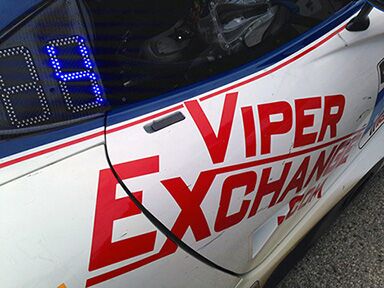