MOORESVILLE, N.C. (April 29, 2015) – Following the recent announcement that ViperExchange.com and Riley Motorsports have been granted an official entry by the Automobile Club de l’Ouest (ACO) to the 24 Hours of Le Mans, June 13 – 14, the team unveiled today the initial rendering of the livery the No. 53 ViperExchange.com/Riley Motorsports Dodge Viper GTS-R will display in the 83rd running of the Le Mans classic.

Ben Keating, Jeroen Bleekemolen and Marc Miller will co-drive the No. 53 ViperExchange.com Viper that will carry a red, white and blue livery with associated support from Dodge, TI Automotive, Michelin, Pennzoil, Client Command and Motegi Racing. The team is also open to any additional parntership opportunities and is willing to provide premium livery space on the Viper to any potential race sponsors.

Keating and the ViperExchange.com team, which had initially been listed as the first reserve on the Le Mans entry list, now have a rare chance to earn victories in both of the world’s premier 24-hour endurance races in the same year. In January, Keating, Al Carter, Cameron Lawrence, Kuno Wittmer and Dominik Farnbacher drove a Dodge Viper GT3-R, sponsored by TI Automotive and ViperExchange.com, to victory in the GT Daytona (GTD) class in the 53rd Rolex 24 At Daytona IMSA TUDOR United SportsCar Championship race.

“For sure, Le Mans has the most history and prominence in the sports car racing world,” Keating said. “There is nothing like it. Any 24 hour race is tough and filled with the drama that only a twice-around-the-clock race can create, but Le Mans is special. Whether it has been books, movies or careers, Le Mans has been the basis of so many incredible stories and challenges. For me to be able to race a Viper at Le Mans makes it even more incredible. This is a dream on so many levels.”

Bleekemolen scored a LMP2 class victory at Le Mans in 2008 while Keating and Miller are both preparing for their first start in the classic French race on Circuit de la Sarthe.

Riley most recently ran the two-car SRT Dodge Viper GTE-Pro team in the 2013 edition of the 24-hour, but he and his father, Motorsports Hall of Fame of America member Bob Riley, have decades of experience at Le Mans.

“I have never seen a team better than Riley,” Keating said. “They know how to achieve results, while also being great to work with.”

Next up for the ViperExchange.com/Riley Motorsports team is GTD Round 3 of the 2015 IMSA TUDOR Championship at California’s Laguna Seca Raceway, May 1 – 3. That event’s featured Continental Tire Monterey Grand Prix can be seen live on FOX Sports 1, Sunday, May 3, at 4 p.m. EDT/1 p.m. PDT. 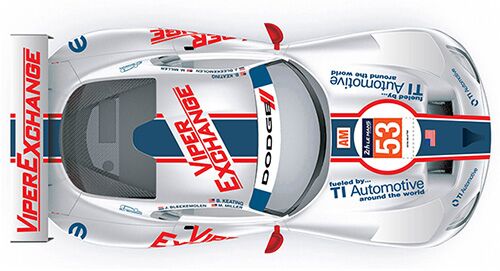