The pair took the GT Daytona (GTD) class in thrilling fashion, with Bleekemolen passing Park Place Motorsports driver Kevin Estre two laps from the finish and winning by 1.038 seconds. Keating started the race on the demanding 2.459-mile circuit and led twice during his stint, turning the car over to Bleekemolen in the lead.

Five Questions With ... Ben KeatingKeating raced a Porsche 911 GT3 Cup in last year’s American Le Mans Series presented by Tequila Patrón, winning the GTC class with Damien Faulkner at Austin’s Circuit of The Americas. It was the first time that he regularly raced a car other than a Viper in his career.

He won five career championships in Vipers – including the 2011 and 2012 SRT Viper Cup – winning five races the later year.

“Racing what he sells,” Keating operates the largest Viper dealership in the nation, located on the outskirts of Houston. Viper Exchange is the conglomerate of Keating’s four Dodge/Chrysler/Jeep dealerships in Texas, centered at Tomball Dodge Chrysler Jeep near Houston. In all, he owns the Keating Auto Group, which includes nine dealerships representing 10 different brands. 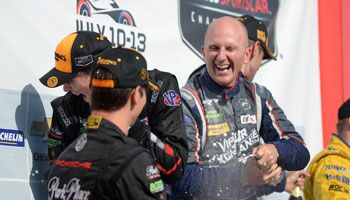 How important was your first TUDOR Championship victory in the Dodge Viper GT3-R at Canadian Tire Motorsport Park?

“It was a huge deal. Not only is it chassis No. 1 of a brand-new car, but it was a new team, new everything. With all the setbacks we’ve had this season, whether it was blowing an engine or burning at Sebring, we feel like we’ve started over a few times. We’ve always had a fast car. We’ve got a great driver lineup and a great team. But this was the first time we’ve been on the podium – let alone being on the top step.”

How did you get involved with Vipers?

“Back in 2005, my wife gave me a Driving Experience weekend at Texas World Speedway (in College Station) for Christmas. Being that I’m a Dodge dealer, I knew I had to take a high-performance car, so I grabbed a Viper right off the showroom and took it to the speedway. It was the best stress reliever I’ve had in my entire life, and I was hooked forever. It was an adrenaline rush. Every time I’d get off the track I’d be shaking from all the adrenaline. Then the next hour sitting in the garage before the next session would be the most relaxed I’d felt in years. I fell in love with it, and ended getting involved with the Viper Racing League. I learned to race in a Viper and raced several of them, and won lots of championships with them. I also started to sell quite a few Vipers. Because the Viper community is so close knit, along the way I became the No. 1 volume Viper dealer in the world. It’s become not only what I know and love, it’s also what I sell. As I said from the podium at Canadian Tire Motorsport Park, hopefully it’s a case of ‘Win on Sunday, sell on Monday.’”

How did you get to purchase the first Viper GT3-R, and how did you get involved with Bill Riley in setting up the GT Daytona team?

“Ever since the car was announced at the (2012) New York Auto Show, I was all over it. There was speculation at the time that it would be eligible for the ALMS. Bill Riley was there, Scott Atherton was there, and I was in everybody’s ear at the show, trying to see if I could make that happen. That talk went away after the merger was announced, but I was still hopeful. Quite frankly, that was why I ran the whole (2013) season in the ALMS GTC class with the Porsche, in preparation and in hopefulness of being able to run in the TUDOR Championship in a Viper. That enabled me to stay close to SRT and those relationships. Once they developed the idea that they might be able to make it happen, you had to have someone willing to take the first leap of faith – to jump off the cliff – buy the first car, help develop the car and show off what the car could do. I was eager to be the hand raiser. So early on I agreed to buy the first car and help Bill Riley develop it into one of the top cars.”

What role did you play in setting up the new Vipers?

“The development really took place in the fall and spring of this past winter. We spent quite a bit of time testing at the track in Kershaw (South Carolina). It was a matter of doing laps, figuring out what we need to work on. There’s a lot of work like that to be done with a totally brand-new car. We did a lot of driving and a lot of work, and we really felt good coming in to the brand-new series with a brand-new car. We felt we had a car capable of making it to the end of the season-opening Rolex 24 At Daytona, but our only problem was we ended up having to replace the clutch. A minor tolerance difference caused the clutch to fail after 15 hours. There was no way we could have known that unless we ran the car 15 hours straight. Whether it was the clutch tolerance at Daytona, or the shifting problem that resulted in the fire at Sebring, you’re always continuing to develop the car, it’s a non-stop process.”

Now, the TUDOR Championship is headed to Indianapolis. What’s your favorite Indy 500 memory, and what’s it like to race at the famed Brickyard?

“As a kid growing up, I was not into racing cars. My father was a Ford dealer, and he won a trip to the Indy 500 in 1992, and he asked me to go with him. It was a phenomenal trip, and it was a joy to go the way we went, super first class. Our seats were right at the finish line. For your first experience to go to that iconic race, and see what was the closest finish in history at the time, was super exciting. That’s where I first learned what all the commotion was about, at what I called the ‘Super Bowl of motorsports.’

“I ran at Indy with GRAND-AM in 2012, in a Porsche with Jorg Bergmeister, and had a phenomenal weekend. It rained heavily, and it was really tricky, and Jorg was unbelievable driving in the rain. He was going by Prototypes like they were cones on the track. I kissed the bricks and have a lot of photographs from the weekend. Quite frankly, I want to win there now to make that picture legit. I feel like a poser, having kissed the bricks at Indy without a win.” (He finished 11th).